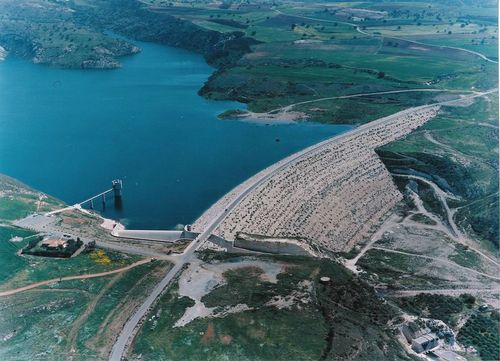 Nine dams have already overflowed while Kouris — the island’s biggest — is close to following suit, with water levels currently at 96.6%, according to the latest figures posted by the Water Development Department on their website on Tuesday.

With a capacity of 115,000 million cubic metres (mcm), Kouris accounts for about a third of total dam capacity on the island and has only overflowed twice in March 2004 and April 2012 since it was inagurated in 1989.

With the dam expected to overflow imminently, the Water Development Department has announced measures so that the public can visit safely and with the least inconvenience.

It said that the road above the dam will remain free of vehicles and vendors’ stalls so that pedestrians can move safely.

The heavy rains of recent days, on the back of last year’s particularly good inflow of water has helped push water stocks at near capacity.

As of today, total reserves stand at 94.6% of the total — or 275,226 mcm. On the same day last year, reserves were at only 24.3% — though heavy rains in January, February and March last year led to record inflow of water and the overflow of several dams, including the island’s second largest Asprokremmos.

Asprokremmos overflowed again over the weekend for the second consecutive year as did Yermasoyia dam. Another seven, smaller dams, have also filled up — Kalavasos, Arminou,  Kanaviou, Argakas, Pomos, Xyliatos and Kalopanayiotis.