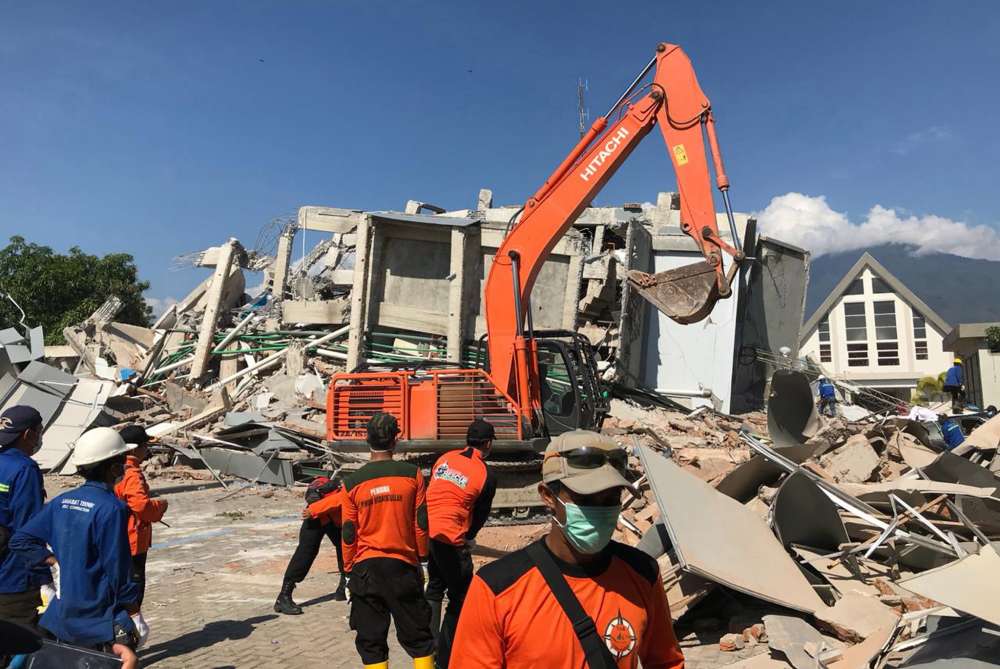 Indonesian authorities scrambled on Monday to get aid and rescue equipment into quake-hit Sulawesi island and prepared to bury some of the more than 800 dead, while shaken survivors streamed away from their ruined homes in search of food and shelter.

The confirmed death toll of 844 looked certain to rise as rescuers reached devastated outlying communities hit on Friday by a 7.5 magnitude earthquake and subsequent tsunami waves as high as six metres (20 feet).

Accounts filtering out of remote areas brought news of devastation, including the deaths of 34 children at a Christian study camp.

Dozens of people were reported to be trapped in the rubble of several hotels and a mall in the small city of Palu, 1,500 km (930 miles) northeast of Jakarta, with hundreds more were feared buried in landslides that engulfed villages.

President Joko Widodo told reporters getting those people out was a priority.

“The evacuation is not finished yet, there are many places where the evacuation couldn’t be done because of the absence of heavy equipment, but last night equipment started to arrive,” Widodo said.

“We’ll send as much food supplies as possible today with Hercules planes, directly from Jakarta,” he said, referring to C-130 military transport aircraft.

The national search and rescue agency said one woman was rescued overnight in the Palu neighbourhood of Balaroa, where houses were swallowed up when the earthquake caused soil liquefaction.

Most of the confirmed deaths were in Palu, a city of about 380,000 people, where authorities were preparing a mass grave to bury the dead as soon as they were identified.

However, nearly three days after the quake, the extent of the disaster was not known with authorities bracing for the death toll to climb – perhaps into the thousands – as connections with remote areas up and down the coast are restored.

Of particular concern is Donggala, a region of 300,000 people north of Palu and close to the epicentre of the quake, and two other districts, which had been cut off from communications.

The four districts have a combined population of about 1.4 million.

Aid worker Lian Gogali, who had reached Donggala district by motorcycle, said hundreds of people facing a lack of food and medicine were trying to get out but evacuation teams had yet to arrive and roads were blocked.

Indonesian Red Cross spokeswoman Aulia Arriani said the situation in another of the affected districts, Sigi, was dire.

“My volunteers found 34 bodies buried under tsunami debris … missing children who had been doing a bible camp,” she said.

Sulawesi is one of the earthquake-prone archipelago nation’s five main islands and sits astride fault lines. Numerous aftershocks have rattled the region.

Officials say rescuers need heavy equipment to shift slabs of broken concrete but access to many areas has been hampered by damaged roads, landslides and collapsed bridges.

A Reuters witness said queues at petrol stations on the approaches to Palu stretched for kilometres. Convoys carrying food, water and fuel headed towards the city while a stream of residents headed out.

The state energy company said it was airlifting in 4,000 litres of fuel, while Indonesia’s logistics agency said it would send hundreds of tonnes of rice.

The government has allocated 560 billion rupiah ($37.58 million) for disaster recovery.

Military aircraft were sent to bring people out of Palu, where crowds of people clutching bags and boxes were waiting at the airport, military official Bambang Sudewo told Metro TV.

It was hoped up to 1,500 people could be taken out every day, with children, women and the injured the priority, he said.

Indonesia, which is on the seismically active Pacific Ring of Fire, is all too familiar with earthquakes and tsunamis. A quake in 2004 triggered a tsunami across the Indian Ocean that killed 226,000 people in 13 countries, including more than 120,000 in Indonesia.

Questions are sure to be asked why warning systems set up after that disaster appear to have failed on Friday, and why more people in coastal areas had not moved to higher ground after a big quake, even in the absence of an official warning.

Sutopo Purwo Nugroho, spokesman for the National Disaster Mitigation Agency, told reporters on Sunday none of Indonesia’s tsunami buoys, one device used to detect waves, had been operating since 2012. He blamed a lack of funds.

The meteorological and geophysics agency BMKG issued a tsunami warning after the quake but lifted it 34 minutes later, drawing criticism it had been too hasty.

However, officials estimated the waves had hit while the warning was in force.

The head of Indonesia’s investment board said Widodo had agreed to accept international help and he would coordinate private sector assistance from around the world.