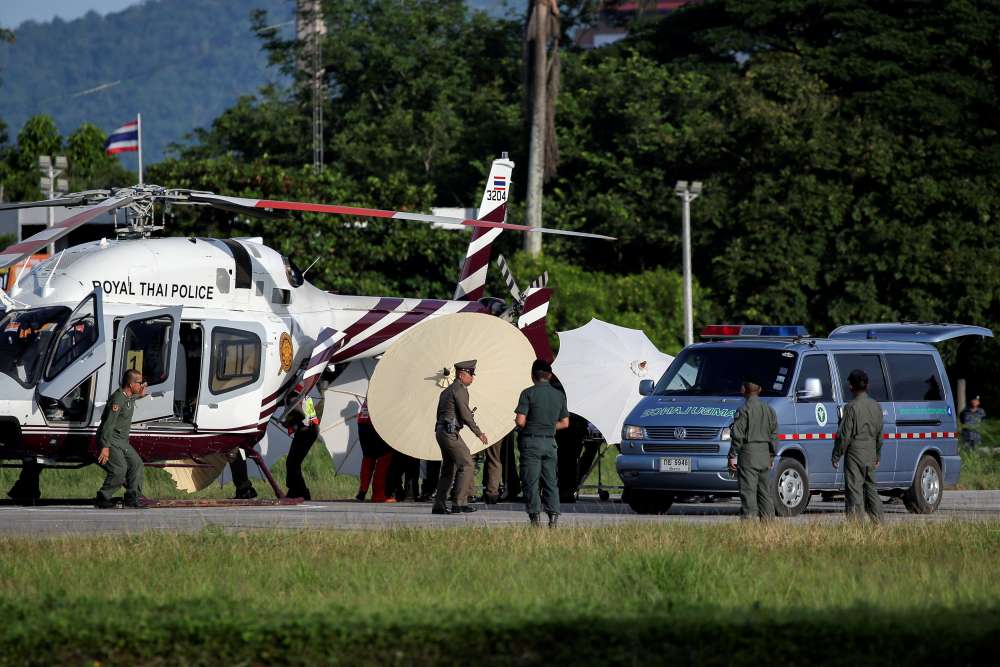 The first four boys rescued from a flooded cave in northern Thailand were in good health and demanding fried rice in hospital on Monday, the head of the rescue team said, as divers resumed operations to bring out the remaining members of the group.

The bid to rescue the boys – aged between 11 and 16 – and their 25-year-old soccer coach got going again after a break late on Sunday to replenish the team’s oxygen supplies and make other preparations deep inside the cave.

The four boys, rescued on Sunday, were flown by helicopter from the Tham Luang cave to the Chiang Rai Prachanukroh hospital, located at the heart of Chiang Rai province, about 70 km (40 miles) away.

A fifth boy was rescued on Monday afternoon, a Royal Thai Navy official said. No other details on him were immediately available.

Seven more boys and the coach are still trapped.

“The four children are fine. The children complained that they were hungry and wanted holy basil stir-fried rice,” Narongsak Osottanakorn, the head of the rescue operation, told reporters on Monday, referring to a popular Thai dish.

Interior Minister Anupong Paochinda also said the boys were in good health. He did not give further details.

Officials have yet to confirm the identities of the four boys freed. Narongsak on Monday said their identities were being protected out of respect for the families of those still trapped inside the cave.

Officials last week said they would bring the fittest people in the group out first, but Narongsak later said that whoever was ready first would be escorted out.

A source involved in the rescue mission who saw two of the four boys walk out of the cave told Reuters that they looked tired but healthy, adding that one even looked “vivacious and fresh”. He did not give further details.

“Imagine marathon runners. It’s like when they reach the finish line exhausted,” said the source.

At the hospital in Chiang Rai, green canvas sheets had been put up to block the entrance from view.

Ambulances were on standby to receive the next batch of boys who are expected to be plucked from the cave.

Medical staff involved in the rescue mission told Reuters their first assessments when the boys arrive at the hospital will focus on their breathing, signs of hypothermia and an airborne lung infection known as ‘cave disease’ which is caused by bat and bird droppings and can be fatal if untreated and allowed to spread to other parts of the body.

The first four rescued boys have been placed in a ward set aside specifically for the cave rescue, a source at the hospital said.