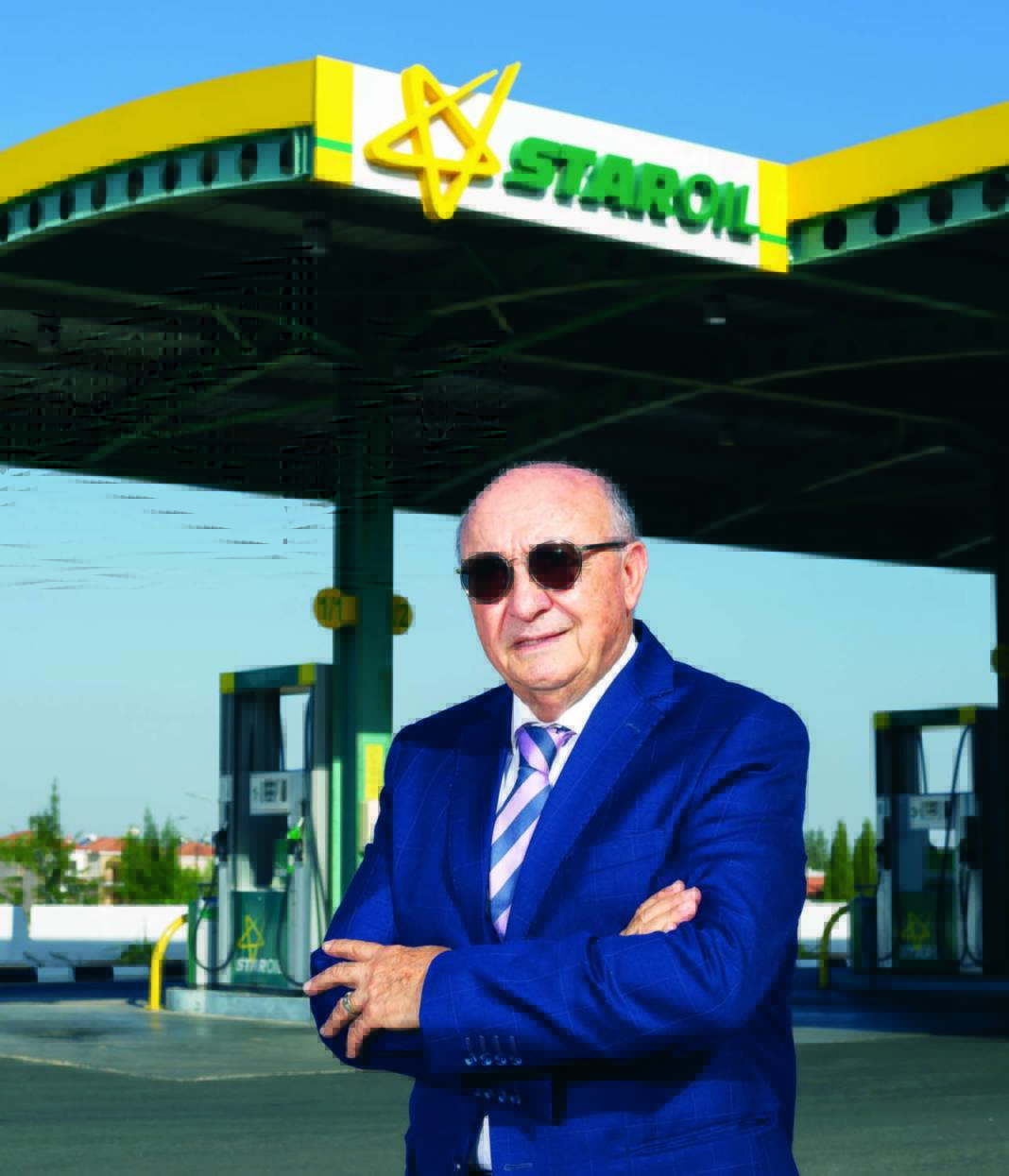 «OUR STAFF IS THE REASON FOR OUR SUCCESS»

STAROIL EXECUTIVE DIRECTOR GIORGOS PETROU, ON THE OCCASION OF THE 15TH ANNIVERSARY OF THE CYPRIOT PETROLEUM PRODUCT COMPANY’S OPERATION, TALKS TO FORBES ABOUT THE BUSINESS’ RECIPE FOR SUCCESS AND ANALYSES ITS DEVELOPMENT PLANS. HE ALSO COMMENTS ON THE PANDEMIC’S IMPACT AND ON COMPETITION WITH THE PETROL STATIONS IN THE OCCUPIED AREAS AND EXPRESSES HIS OPINIONS ON THE FUTURE OF THE CYPRUS ECONOMY

BASED ON THE COMPANY’S PLANS, OUR NETWORK IS ANTICIPATED TO REACH 15 PETROL STATIONS AROUND CYPRUS, WHILE AT THE SAME TIME, THERE WILL ALSO BE AN EXPANSION OF OUR TANKER TRUNKS WITH MODERN VEHICLES THAT ARE MORE ENVIRONMENTALLY FRIENDLY. ALSO IN THE COMPANY’S PLANS IS THE PURCHASE OF PROPERTIES CONSIDERED NECESSARY FOR THE EXPANSION OF THE NETWORK.

Cypriot petroleum product company STAROIL is celebrating 15 years of operation this year. How satisfied are you with the company’s development so far?

I am truly proud of the course Staroil has taken and also of its ongoing development since, over the 15 years of its operation, the company has managed to significantly change the status quo of our country’s petroleum products industry. The trust and support we have amassed all these years have become a driving force for us to try even harder to evolve our services and provide our distinguished clientele with even more innovations. Since the company’s start in 2006, Staroil has become the first Cypriot petroleum products company to import and distribute fuel directly to companies and individuals. Our flexible managerial structure and cutting out the middleman has differentiated us from the competition, and we have created a new era for the Cyprus petroleum product industry. Through our modern terminals, we continue to deliver high quality fuels all over Cyprus in a safe way, with state-of-the-art privately owned vehicles. Within just five years of its creation, Staroil in May 2011 managed to enter the retail market by creating its own network of petrol stations which is being expanded to strategically chosen points to provide high-quality professional services within a unique customer-centred framework. As Staroil completes 15 years of operation, we are in the pleasant position of operating 10 private petrol stations in the districts of Nicosia, Limassol, Larnaca, Paphos and free Famagusta, providing consumers with quality fuels and lubricants at competitive prices. 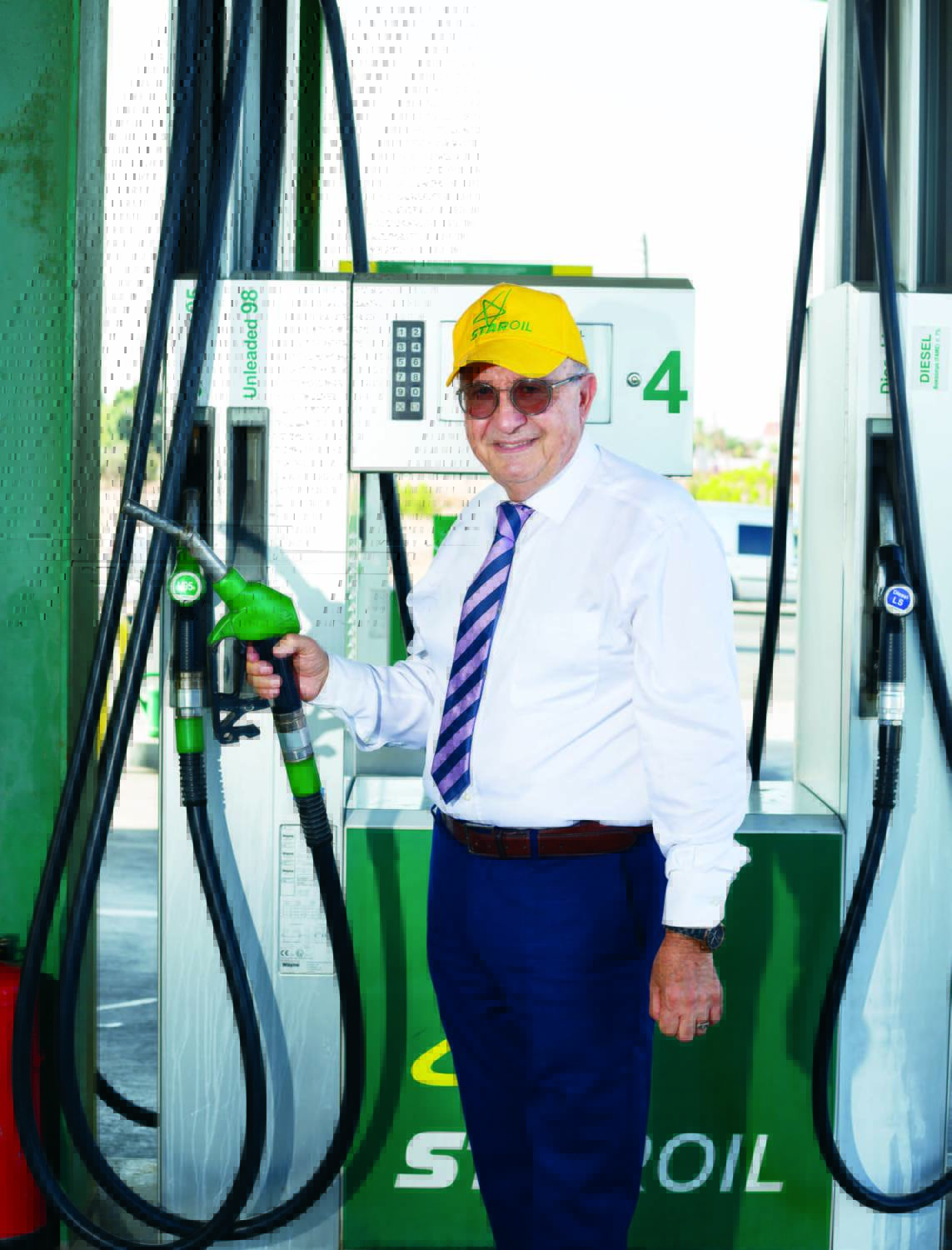 What is the company’s expansion plan?

The company’s policy includes the creation of a new network of petrol stations that will be able to serve customers in remote communities throughout the island, and in areas where there are no other petrol stations. So, our goal is to further expand our petrol stations to serve even more areas. The strategy to geographically expand Staroil’s petrol station network is continuing at a steady rate with the aim of getting the new petrol stations running within the year. There is also the installation of Photovoltaic Systems both at our service stations and at the company’s Terminal in Nicosia, which, incidentally, is the only terminal situated near the capital city. Based on the company’s plans, our network is anticipated to reach 15 petrol stations around Cyprus, while at the same time, there will also be an expansion of our tanker trunks with modern vehicles that are more environmentally friendly. Also in the company’s plans is the purchase of properties considered necessary for the expansion of the network. Also being considered is the installation of fast-charging points for electric cars as well as hydrogen-fuelling points.

To what extent was the company affected by the Coronavirus pandemic and to what extent are you experiencing competition with petrol stations in the occupied areas?

The Coronavirus pandemic has significantly affected the Cyprus fuel market as a result of the necessary restrictions on movement and of several sectors suspending their operations, for example the transport of merchandise, something that had a direct impact on our company. The reduction in demand for fuel from consumers reached 70% in 2020, but since the first relaxation of the restrictive measures in May there has been a proportionally large increase in sales, at a level of 50%. The year 2020 ended with a reduction of 5% compared to 2019.  In the year 2021, the situation has improved significantly due to the vaccine programme and the government’s gradual relaxation of restrictive measures, something which has allowed people to dynamically begin moving around again. As I estimated 3 months ago, the reduction for the current year will be limited to around 10% in comparison to 2019. Competition with the occupied areas is without a doubt unfair and certainly the petrol stations of both Nicosia and free Famagusta have been affected. I believe that approximately 20% of consumption has been channelled to the occupied areas, although our petrol stations in the Nicosia District have been affected to a much lesser degree because of where they are situated. But the state has suffered very serious losses that may surpass 100 m Euro.

Apart from STAROIL, you head several other companies for the PETA Group which has factories in Cyprus and Jordan. How are the company’s exports doing and what do your future plans include?

The Group includes two other areas of activities. The companies manufacturing paint brushes and paint rollers with factories in Cyprus and Jordan, and PETA PLASTICS which specialises in the manufacturing of plastic containers and bottles of various types, mainly for the Cyprus market. PETA has gradually evolved into the only paint brushes and paint rolls manufacturing industry in Cyprus and the Middle East. Growing export activity laid the basis for the operation, in 2001, of a second factory in Jordan, enhancing the Group’s exports, with customers in more than 12 markets in the Middle East and the wider Arabian Gulf.  Created the same year was Peta Plastics, specialising in plastic food and liquid containers of various types, and which, having secured ISO 22000 certification, produces high quality packaging for the Cypriot food industries.

What do you advise your staff and what do you believe makes you stand out from your competitors?

I believe that a company’s success is, first and foremost, due to its staff and then due to proper management and the prices and products it offers. For that reason, my advice is for staff to treat customers as they would like to be treated. To be polite and well-informed. The fact that we are in constant contact with our customers gives us the advantage of proximity and we have managed to cultivate friendly and respectful relationships with them. We can immediately understand their problems and needs, make decisions, and solve problems. Our procedures are simple and do not require pre-approval.

What is the best advice you were ever given?

It is known that for many years I was President and CEO of BP Cyprus, and, in fact, I was the first Cypriot to be appointed by the company. Two pieces of advice were given to me then: «Pay attention to safety and watch out for fraud».

Is someone born a leader, or do they become one?

I believe that all people are born with certain special characteristics, and these include leadership abilities. However, I also believe that innate characteristics represent only 50% of what someone needs to be considered a leader. Beyond innate talent, leadership requires the right conditions, a mentality for development, and faith in ourselves. The continuous cultivation of a person through learning for older and more powerful people is necessary for their personal and professional development. 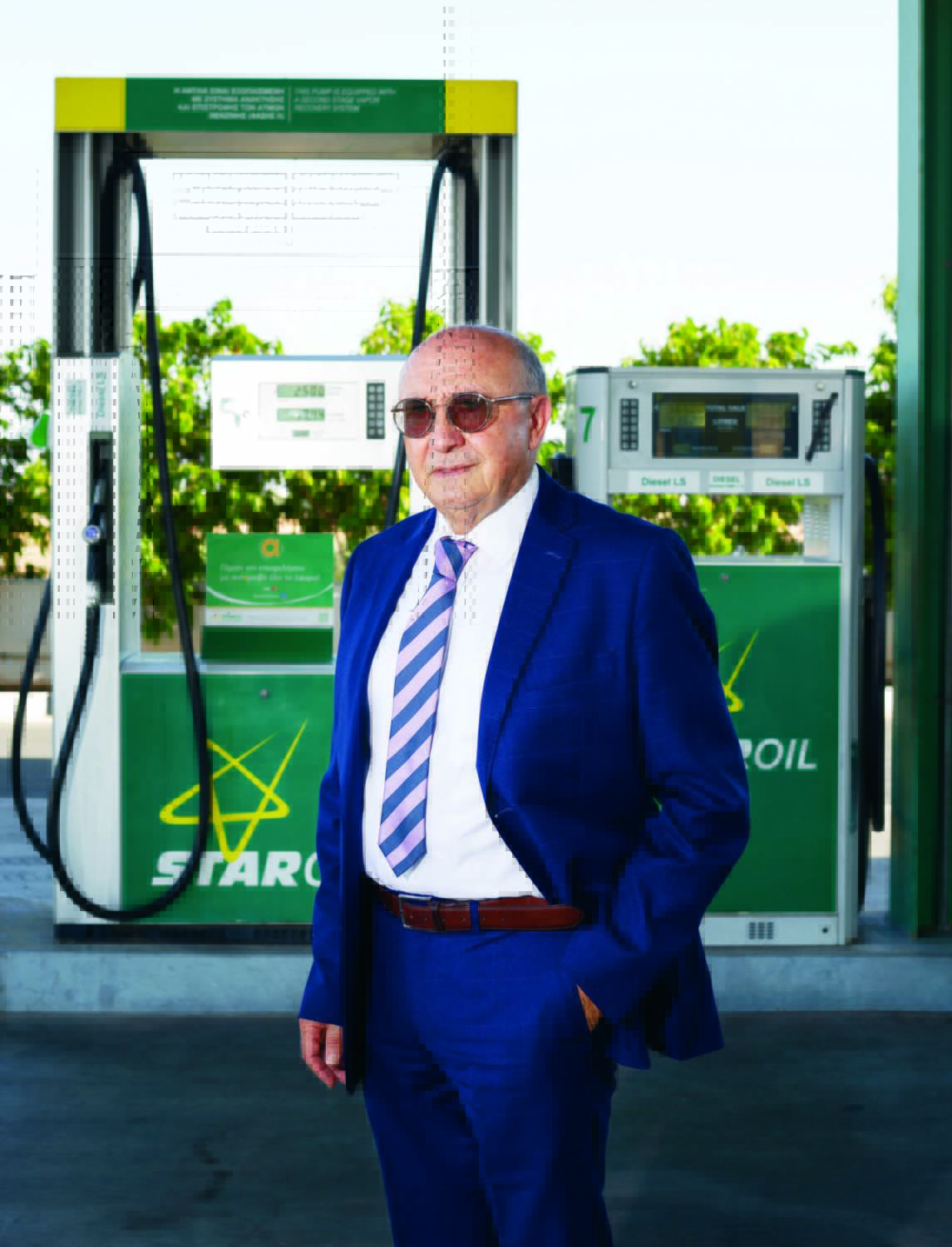 THE WORST IS BEHIND US

What is your opinion of the Cypriot economy? Despite the difficulties, can we look to the future with optimism?

I would like to believe that the worst is already behind us. Healthy companies will continue to exist while I believe that problematic ones will not survive. Tourism will gradually recover while viable industries will have better opportunities to develop and improve through the new support programmes that have already been announced.  Due to the greatly increased fares from China, even if somewhat temporarily, there are now opportunities in the Cypriot market for both exports and increased sales.

As a former Chairman of the Cyprus Employers and Industrialists Federation (OEB) board can you tell us what are some of the most significant problems Cypriot companies are facing today?

At OEB there is a remarkable committee for Industry and another for Economy which both consist of acclaimed scientists and successful entrepreneurs who analyse problems and recommend, to the competent Ministries, the corrective actions that should be implemented to support businesses.

When it comes to companies already operating, the main problems they face can be summed up to the following:

In connection to new companies, and something that will also help in obtaining capital through the Recovery and Resilience Fund, the main issue, apart from bureaucracy, is their evaluation by financial institutions which unfortunately do not have the necessary know-how when it comes to projects that are new or unfamiliar to them.

The chapter of tax reform opened recently. What are your positions on this matter?

It is time for our taxation system to be modernised. Study and careful management are required to attract foreign investment. Over the past decade companies have been burdened with significant tax increases that have certainly impacted their investment programmes. The increase in the tax rate to 12% and especially the tax on dividends to 17%, must be reviewed in the context of the reform, because they deprive businesses of necessary liquidity and force them either to limit their investments or to borrow more.

He was born in Engomi, Nicosia in 1947. He studied Mechanical Engineering at the University of Surrey in England with specialisation in Economics and Industrial Law and then returned to Cyprus where he was employed by SHELL. He served in various positions and at various levels at multinational companies SHELL and BP both in Cyprus and at the Companies’ headquarters in Athens and London. In 1995 he was promoted to the position of President and CEO of BP Cyprus where he served until 2002. In 2003, he was appointed as Non-Executive Chairman of the newly created BP Eastern Mediterranean.

In 1977, he founded PETA CO which specialises in the production of paint brushes and paint rollers, and which today has two factories (in Cyprus and Jordan) exporting to 15 countries. The Company’s third factory, PETA PLASTICS, was founded in 2000 and specialises in production of plastic food packaging and bottles.

In 2007 he founded a privately-owned petroleum products company, STAROIL, which specialises in the distribution of fuels to commercial consumers and households and more recently created private petrol stations.

He is married to Parvin Petrou, with whom he has 3 children.