A sombrero and a dream: One cash-strapped fan’s World Cup Odyssey 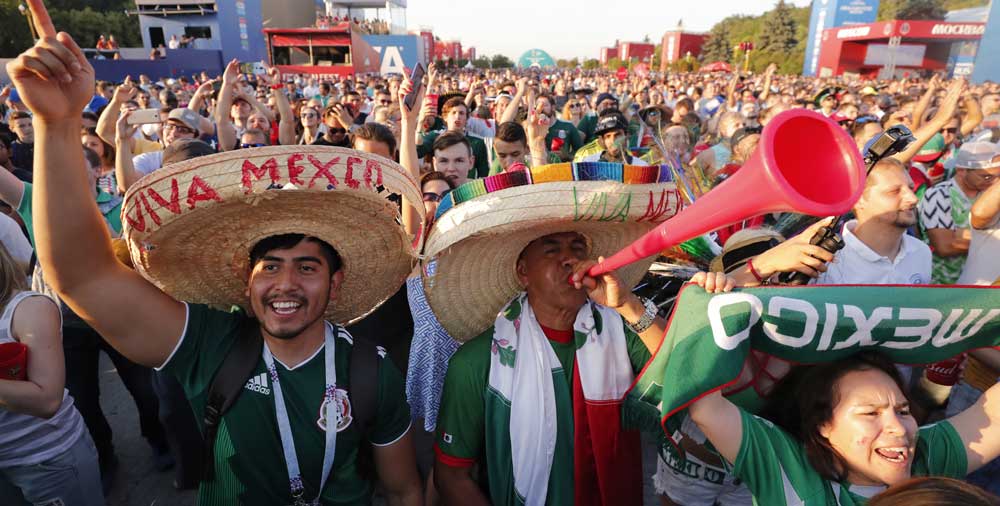 A sombrero, out here, has special powers.

It provides 360-degree cover from the summer sun, obviously. But it can also disarm a stranger, start a conversation between people who speak different languages, get its owner onto an international television broadcast, or even slip open a door to romance.

“Ladies love the sombrero,” said Jose Ramon Diaz, who bought his sombrero two years ago in Tehuacán, Mexico, his hometown, for 47 pesos, or about $2.50. “It’s a key that opens a lot of doors.”

Diaz has learned these lessons, and more, during his time alone in Russia this month, rooting for Mexico at the World Cup.

A college student, he made some sacrifices to finance his first trip outside North America, starting with leaving Tehuacán, where he lives with his father, to go to Los Angeles (Diaz was born in the United States) and sleep in a homeless shelter for a month while working two jobs to stockpile cash.

In Russia, Diaz has been eating as infrequently as possible. When he does, he aims to spend no more than 300 rubles, or about $4.75, per meal. This has left him subsisting mostly on Subway sandwiches (“Give me the cheapest,” was the first Russian phrase he learned) and baby food (“It’s cheap and nutritious,” said Diaz, a 23-year-old man).

Outlandish as his World Cup plan sounds, fans just like Diaz repopulate the tournament every four years, enduring periods of self-imposed hardship to nurture their passion and making life decisions nonfanatics would consider ludicrous. One Peruvian was said to have gained more than 50 pounds before his trip because the only tickets he could find were for obese fans.

The Mexican national team, as it happens, has a lot of these fanatics.

Oscar Martinez, 26, for example, had a job at a San Diego shipping warehouse, until he asked his boss for time off to go to Russia. “They said if I go I won’t have a job anymore,” he said. “I was like, ‘OK, bye!’”

Many others seemed to have subscribed to this same soccer calculus. Mexico had the sixth-highest number of ticket buyers for this tournament, 60,302, and it is reasonable to assume that a big chunk of the 88,825 sold to the United States were scooped up by fans of El Tri, as well.

“Half the people really love soccer and half want to be around the party,” said Pablo Calderon, 31, a lawyer from Mexico City who had tickets to all of Mexico’s games.

Diaz, who did not have tickets to any of the team’s games, got to Moscow several days before the tournament because the airfare was cheaper to travel then. He spent a couple of days in a $10-a-night hostel before connecting with a Russian man on the outskirts of the city with a spare couch who wanted to practice his Spanish.

Early this month, before the international hordes arrived, Diaz caused a stir wherever he went with his sombrero. Eight times he was happily plucked off the street for television interviews. Locals formed lines to take pictures with him. Multiple women gave him their phone numbers. (“A recommendation for everyone who hasn’t arrived: bring a sombrero,” Diaz said on one Mexican television broadcast.)

By the day of Mexico’s first game, Moscow was brimming with visitors. People stopped to make small talk.

“Sombrero!” said a man wearing a German flag over his shoulders.

On Saturday, a couple of hours before Mexico would face South Korea, Diaz rambled around looking for a ticket outside Rostov Arena. He had little luck until he ran into an older man wearing a white jersey. When the man took off his baseball cap and sunglasses, Diaz realized he was Enrique Meza, a former Mexico national team coach known as “Ojitos” for his sharp eyes and the current manager of Puebla in the Mexican league. Meza sold him a spare ticket, a field level seat behind the goal, for $100.

Inside, Diaz put on his sombrero and bounced along with the other 43,472 people at the game, all of whom had undertaken mini-odysseys of their own to get there.

On Monday afternoon, he was back in the back seat of a car on a 1,000-mile, multiday drive from Rostov to Yekaterinburg, where Mexico will play its final game in the group stage Wednesday. He has no plans beyond that. He does not even have a return ticket home.