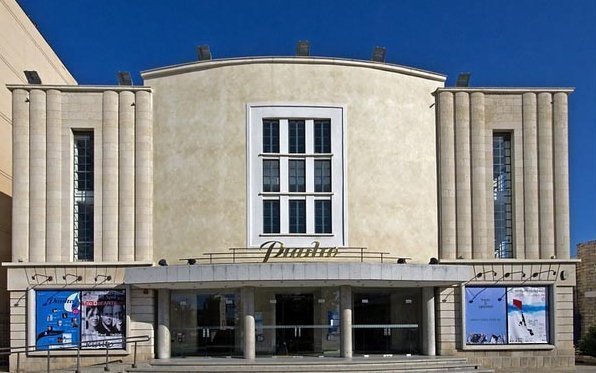 Rialto is a major performing arts venue serving the demands of multicultural audiences in Cyprus for exceptional local and international events in music, drama, cinema, dance and opera. Registered as a company limited quarantee in Cyprus no. 97827. Registered Office: 97 Gladstonos street, 30332 Limassol. It was created both as a stage for performances as well as an organization by the Limassol Co-Operative Savings Bank which, in co-operation with the Cyprus Ministry of Education and Culture form its most important contributors.

HISTORY
Rialto was originally built in 1930 by the Chrysochou Brothers and was the first modern, by the standards of the age, cinema in Cyprus. Hosting both film as well as theatre productions, it remained a lively focal point in the cultural life of Limassol for nearly fifty years. Facing first the rise of television and video, followed by the social upheaval brought about by the 1974 invasion that split Cyprus in two, the cinema fell into disuse and finally closed its doors to the public in the mid-1980’s.

And while other old cinemas were being levelled and the old city was being sacrificed to the altar of a controversial development programme,  the Limassol Cooperative Savings Bank bought the abandoned cinema, in February 1991, subsequently refurbishing and putting it back in operation.

The “new” Rialto, preserving important pieces of its past yet, completed with exceptionally modern equipment and substructures, re-opened its doors to the public in May 15, 1999, with a series of brilliant and moving cultural performances, welcoming audiences with the aid of Mikis Theodorakis, Michalis Kakoyiannis and other distinguished guests from Cyprus and Greece.

The thrill of the first weeks for the return of the historical theatre and of Heroes’ Square to the town and its people has gradually given place to the constant delight and satisfaction of an international public, through the variety of  cultural and entertainment possibilities that the organization offers.

Each year hundreds of performances organized inside the theatre and outdoors, attract thousands of spectators, establishing Rialto Theatre as one of the most important cultural institutions of the country.

MISSION
• To continue organising and providing substructures for a wide range of major professional events in Limassol and contributing to the overall cultural development of the town.
• To serve impeccably the needs of our audience, our artists/performers and our sponsors as a youthful, buzzing and efficient theatrical organization.
• To sustain the cultural growth of economically sensitive groups by means of keeping ticket costs low through efficient subsidization.
• To provide the opportunity and the substructure to local creators and associations to present works of quality.
• To keep ahead of contemporary communication and advertising by the efficient use of internet technology. To reach out to the younger audiences in this way and become more involved in their lives.
• To provide timely information about the theatre’s activities to audiences in Cyprus and abroad communicating in both Greek and English.
• To continue the contribution to the upgrade of Limassol’s cultural identity as a town with a distinct cultural profile and activity, through Rialto events and festivals.
• To sustain the multifaceted incorporation of Heroes’ Square – an important and yet, till recently, downgraded area – into the life Limassol.
• To organise guided tours for students of elementary and secondary education aiming to familiarize them with the theatre as a venue and as an organization.

Tickets reservations are valid until FIVE DAYS prior to each performance. You are kindly reminded that from the date that tickets go on sale, FOUR WEEKS before each performance, and until the day of the performance (including the last five days) tickets can be acquired: (i) electronically through our website www.rialto.com.cy, (ii) in person at the RIALTO Box Office and (iii) by phone on 77 77 77 45 using your credit card.

The BOX Office is open 90′ minutes prior each performance

“VESSEL: The Mantras Room” at Rialto on October 19