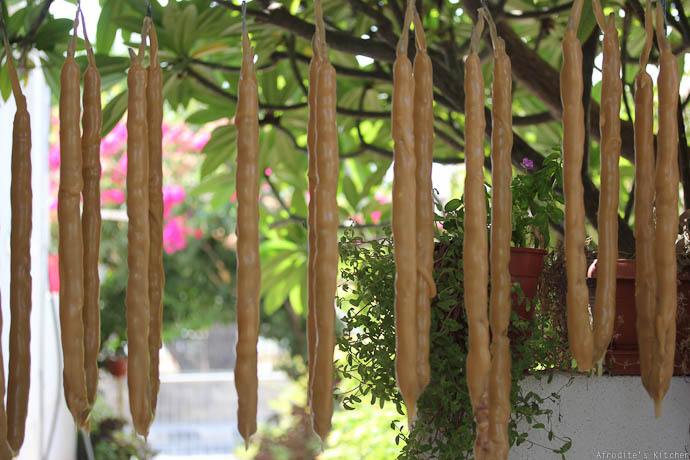 Palouzes or moustalevria – from moustos (must) and alevri (flour) – is a thick, jelly-like sweet made from grape must. The traditional way of extracting must was through pressing grapes with the feet, a method which is now used only in some villages around the island. In Cyprus, the grape must comes mainly from the indigenous white Xynisteri and to a lesser extent from the red variety ‘Mavro’, which in Greek means black. Grapes are harvested during September and October, and this is the period during which all grape products were traditionally made.

Palouzes:
The traditional way of making palouzes is by mixing 10kg of grape must with 1kg of flour and heating the mixture while stirring continuously until it coagulates, adding rose water, cinnamon and mastic towards the end so as to maintain their aroma. Palouzes is then poured into plates where it is left to cool. Some people enjoy eating palouzes hot but it is more commonly served cold with a garnish of almonds or walnuts, whole or crushed. Due to its high moisture content, it has a few days of shelf life if not refrigerated. Palouzes that is left to dry in the shade is cut into rectangular shaped pieces to give another traditional sweet food, kiofterka, which has a longer shelf life. This is a favourite energy food, often consumed along with zivania, a perfect warm-up during the winter.

Shoushoukkos:
This is the best known of all grape juice products in Cyprus. It is possible that the name comes from the word sujuk (Turkish sucuk or Armenian soujouk, which is a type of sausage) because of its shape after it has been prepared. The product is made with almonds or walnuts, shelled and soaked to turn soft, and then sewn onto a cotton thread around two metres long. The thread is dipped several times in finished palouzes, a process that may take several days since each layer has to dry on the string before a new one is added. Every time it is dipped, a new layer of palouzes is added to the previous one until its diameter reaches four to six centimetres.

Shoushoukkos is then left to dry for five to six days, losing much of its moisture, thus increasing its shelf life. To serve, it is cut into slices 2-3cm thick and is enjoyed as a nutritious, natural sweet snack. Shoushoukkos and kiofterka can be stored in ambient temperatures only for a few days. For longer storage, keep refrigerated in vacuum packs for up to four months. They may also be stored in the freezer (in plastic bags) for much longer.