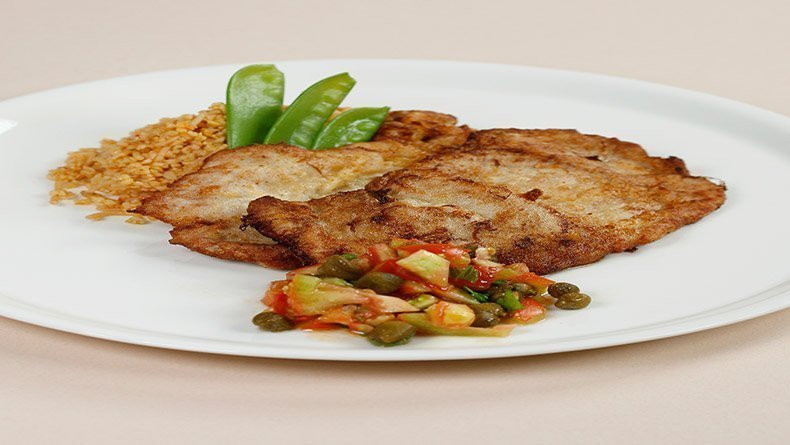 Prepare the salad first and store it in the refrigerator. Cut the fillets in about 4-5 cm thick pieces (about 60 grams each) and hit them one by one to make them as thin as possible, carefully not to tear them.

Salt the fillet slices. Mix the eggs and milk in a bowl (or deep dish) with a wire. Mix the flour with Parmesan in a second bowl.

Mix the picattas with the eggs, turn them to catch everywhere and press down. Then wrap them in the Parmesan mix with flour, making sure they are covered everywhere. Put them on a tray, cover them with a plastic film and store for 1 hour in the refrigerator.

In the meantime, prepare the bulgur. Heat the olive oil in a saucepan and saute the onion with the vermicelli until they become golden brown. Add the tomatoes and boil for 2 minutes. Pour the broth in, wait for it to boil and pour the bulgur. Once it is boiled, lower the heat and simmer for 5-7 minutes. Remove the pot from the fire, cover the bulgur with a towel and allow it to draw its liquids for 10 minutes.

Heat plenty of oil in a large frying pan and fry the picattas, one or two each for about 3 minutes from each side, until they are golden brown. Make them drain on absorbent paper and serve them with the bulgur and salad. If you want to garnish with the snow peas, boil them in plenty of salted water for 3 minutes, drain them, pour them in a bowl with chilled water to cool and re-drain.