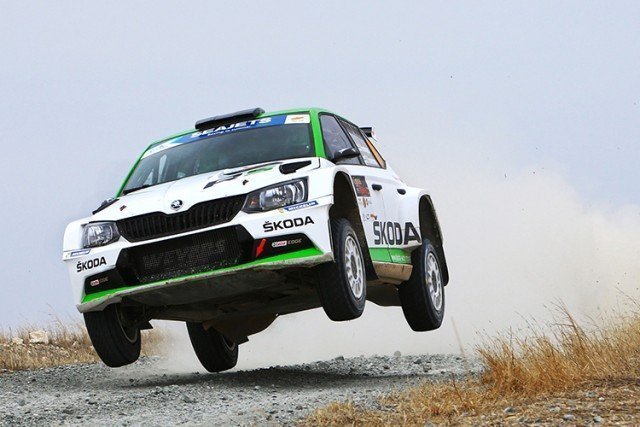 The Cyprus Rally flashed its teeth, proving once more to be one of the toughest rallies in the world after the second loop of the first day turned everything upside down for the morning leaders.

Alexey Lukyanuk had to withdraw after an accident in the fourth stage of the day while leading the rally while Nasser Al-Attiyah had puncture after puncture, finishing the day with just three tyres on his Ford Fiesta R5.

Juuso Nordgren inherited the lead of the event after Lukyanuk’s accident while Al-Attiyah had to nurse his car back to the Service Park with an already used and damaged spare in place of the destroyed on, having no more spares left for the day. “Honestly, taking everything into account, the end of the day finds us ok. We still have an entire day ahead of us tomorrow” said Nasser Al-Attiyah. The Qatari driver finished day one in 4th place overall.

In another turn of events, Alexandros Tsouloftas had to stop his Citroen DS3 R5 in the middle of the final stage due to a broken wishbone, leaving Simos Galatariotis (Skoda Fabia R5) as the top local crew without any nearby contender to challenge them, for now.

Galatariotis had also climbed to second place overall after Al-Attiyah’s tyre decided to explode, with just 4.76 seconds difference between himself and the leading Finn. Third overall is Portugal’s Bruno Magalhaes who had trouble with this setup in the morning, complaining that the car was “too soft” having to balance a good setup for both tarmac and gravel. Lukyanuk’s misfortune certainly plays into the Portuguese driver’s hands since he battles for the ERC championship with the Russian and has the whole of the Sunday to simply drive smart to claim precious points that will count towards that battle. He is currently third, 8.8 seconds adrift of Nordgren. Fifth overall is Herczig/Ferencz (Skoda Fabia R5) while Demosthenous and Laos finish the day in sixth place (Mitsubushi Lancer Evo X). Hungary’s Botka and Mesterhazi are seventh, Avcioglu/Korkmaz are eighth while Stajf/Ehlova and Albert von Thurn und Taxis/Degandt close up the top ten of the 2018 Cyprus Rally after the first, tough day.
The ERC2 battle is an almost entirely Cypriot battle with Polykarpou leading with Panteli and Poseidias fighting it out behind him in the category.

Sunday will see the remaining crews tackling seven stages in total. The biggest highlight of the day will be the exhilarating Psaltis- ENEOS Super Special Stage that will take place in the heart of Nicosia. The day also includes the spectacular Yeri stage, with a total distance of 24.50km just before the SSS. The other two stages will be Lagia and Lefkara (11.49KM and 19.82km). All stages, bar the SSS, will be repeated for the second loop of the day. It should also be noted that the last two stages of the rally will be renamed to Psaltis/Lagia and ENEOS/Lefkara will be the Golden Stages of the rally, which will offer cash prizes to the fastest crews of each category. The Rally Finish will take place on the beachfront of Finikoudes in Larnaca at 18:30.

Liverpool FC put up for sale by Fenway Sports Group