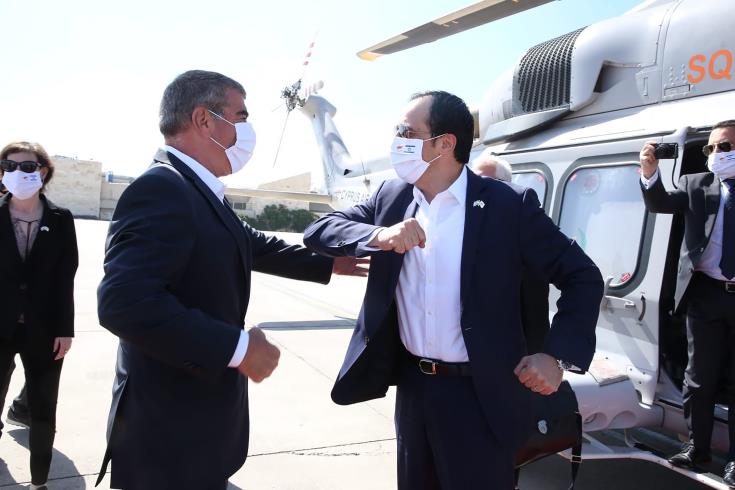 In an interview with Phileleftheros and political editor Andreas Pimbishis, Ashkenazi notes that any sign of weakness will only serve to encourage Tehran’s policy and Tel Aviv believes that nuclear talks currently taking place in Vienna are a mistake, as they are being held under Iranian terms.

Ashkenazi was in Cyprus last week for a four party conference of the foreign ministers of Cyprus, Greece, his own country and the United Arab Emirates, following the historic rapprochement between Israel and the Arab country.

The Israeli foreign minister expressed the conviction that this new state of affairs being forged in the Eastern Mediterranean, the Gulf and the Middle East, will continue and referred to the significance of developing synergies between the countries of the wider regions.

He said that the new forum that set off in Paphos is the first fruit of a new reality in the Middle East following peace agreement between Israel and the Gulf countries and stressed that including other countries in such platforms is the key to achieving stability and prosperity.

This important meeting, thanks to the invitation and initiative of the Cyprus foreign minister, my good friend Christodoulides, is a new and important framework that highlights the shared interests of Mediterranean, Gulf, and Middle Eastern countries. It’s a tangible expression of the strengthening of Israel’s status following the signing of the Abraham Accords and of the new possibilities that have opened up before us, in light of the normalization agreements, for developing diverse fields of collaboration with like-minded countries.

We see great potential in the new forum that has been created and are confident that it will lead to a range of regional synergies in such areas as the fight against coronavirus, managing emergencies, tourism, and more.

It’s one of the first ‘fruits’ of the new reality that has been created in the Middle East since the signing of peace and normalization agreements between Israel and Gulf countries, as well as with Morocco and Sudan. These agreements were designed to bring stability and prosperity to their signatory countries, and today, we are expanding the circle of influence of these agreements and advancing prosperity and stability in the Eastern Mediterranean as well.

Absolutely! We believe that the integration of additional countries into these regional dialogues is the key to achieving stability and prosperity. I would like to see more partners to the Abraham Accords, and additional countries from the Middle East integrating into the regional framework together with Israel and Mediterranean countries, with the aim of fighting more challenges such as those discussed in the meeting – the fight against coronavirus, recovery of the economy and tourism, cooperation in emergencies, and an ‘energy bridge’ that will facilitate the use of green energy. The challenge of climate change, which affects us all and requires cooperation across borders, could also be relevant to this forum. Israel has relevant technological capabilities, and we are interested in collaborating in this field with countries of the region.

I believe that countries such as these, that have signed normalization agreements, as well as other states with which we still do not have official diplomatic ties, will join the circle of cooperation between countries of the region.

We are also interested in developing collaborations with Greece, Cyprus, and the UAE for activities within the framework of professional working groups at various levels that will enable us to jointly cope with the regional challenges that we face. There’s no doubt that these meetings will prepare the ground for talks between leaders and heads of state in the future.

4. Bilateral relations between Cyprus and Israel are excellent. What are the future prospects?

Relations between Israel and Cyprus thrive and find expression in a wide range of collaborations and many shared interests. We congratulate Cyprus for allowing vaccinated Israelis to visit the island more easily.

Israel and Cyprus recently agreed on guidelines for talks between the companies on the Aphrodite-Yishai reservoirs. Their agreement will have to be approved by the two governments. A memorandum on the EuroAsia Interconnector power cable was signed, and we are continuing to promote the EastMed project together.

I hope that this most recent meeting will be just the first step in developing further cooperation in tourism, innovation, bilateral trade, security, and more, with the aim of building additional bridges between Israel and Cyprus.

5. US president said Iran’s enriching uranium was not helpful to nuke deal talks. Do you believe that a deal can be achieved with Tehran? What can the international community do following the latest development?

Iran’s aggressive policy undermines regional stability in the Middle East and poses a threat to world peace. Iran’s involvement in Syria, Lebanon, Iraq, and Yemen has brought destruction and devastation and wherever Iran has left its fingerprint, we see conflict, violence, and terrorism.

Iran’s wide-ranging violations of its nuclear commitments represent another link in the chain of defiance towards Israel, towards its neighbors, and the world. The international community must and can respond harshly to Iran’s activities, designed to acquire nuclear threshold capabilities with all the tools at its disposal. Unfortunately, it currently seems that the international response is not sufficient. Countries like Iran see a weak response such as this as a source of encouragement to continue violations in the knowledge that it will not have to pay a real price for them.

The fact that world powers have come to conduct nuclear talks in Vienna pursuant to Iran’s conditions and demands is very concerning. Iran is currently under significant economic and international pressure, which must be used to achieve broad concessions from Iran that will ensure a real and sustainable solution for the region as a whole.

A return to 2015’s flawed agreement will mean an even worse agreement now (given that, since then, Iran has made significant progress in its nuclear knowledge) and the loss of all economic leverage against Iran. Iran will be given economic benefits and a clear nuclear path, with no capacity to curb its subversive regional activities and growing missile program.