Who cares about the stray cats of Larnaca? 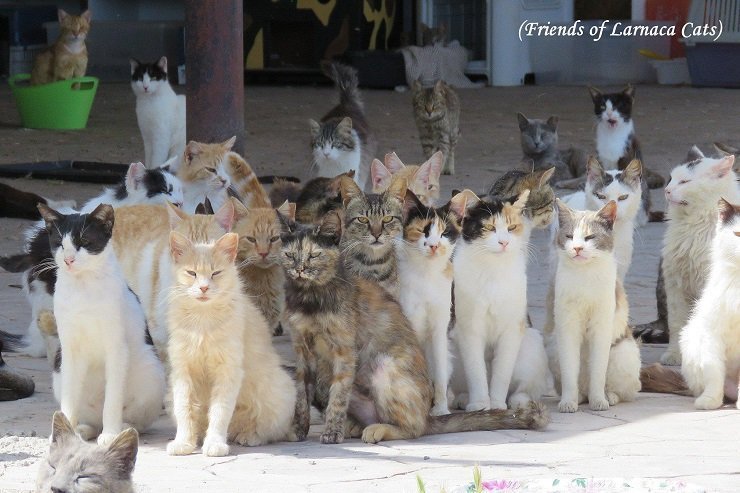 Elias Demetriou moved to Cyprus from the UK in 2009. His first contact with cats came a year later, in 2010, when his wife brought a two week-old kitten home. It was “the beginning of the end,” as he says. Shortly after, he started feeding the cats at the Hala Stultan Tekke in Larnaca once a week. Once a week gradually become a few days a week, and then every day.

Today, Elias and a registered group of volunteers called “Friends of Larnaca Cats” care for more than 600 cats in the coastal city.

“Friends of Larnaca Cats was formed about two and a half years ago. At the time we were just a group of volunteers trying to help street and colony cats around Larnaca. We realised that the task was big and we needed more help. The only way to attract more volunteers was to raise our profile,” says Barbara Mardell, one of the groups’ founders.

The volunteers now feed cats in Larnaca’s colonies, arrange for their healthcare and neuter them. “We pick up sick cats and get them treated at veterinary clinics. We take motherless kittens in and feed them by bottle. They stay in our foster homes until they are old enough to be vaccinated. We are also available for any queries the public may have, be it about how to bottle-feed young kittens, vaccinations, sick cats, etc,” Barbara says.

Friends of Larnaca Cats neutering programme “Nicked and Proud,” is the most successful in Larnaca, Elias proudly says. “To date we have neutered well over 500 cats.”

According to Elias, by far the biggest cat colony is at the salt lake, with around 350-400 feline inhabitants.

“It costs a lot of money but we always seem to manage somehow. What we cannot manage and have never been able to afford are the vet bills. We are in debt for over €10,000 just for this year alone,” he says.

According to Elias, they need over €2000 per month to cover their expenses.

Besides financial problems, what makes their task difficult is the lack of help from the state and the mentality of Cypriots regarding stray animals.

“We have hundreds of abandoned cats every year. There have been weeks when we have found five-six boxes of kittens. In the very few instances that we have actually caught the person that dumped them the answer is always the same: ‘I can’t keep them where they are so I brought them here where people look after them.’ Not one of these people even considers the fact that they are just unloading their responsibilities onto someone else. None of them considers that they are financially burdening someone that is already unable to cope,” Elias says.

When asked if they get any help from the state, Elias said that his calls are totally ignored.”The only contact I have from them is if they need help with a cat-related problem… then they suddenly remember that we exist.”

He says that the government could do a lot to help, from issuing leaflets about the need to neuter pets to arranging educational programmes in schools. “They, also, could for once decide to do their job and actually check up on whether people’s dogs are microchipped. 90% of the stray dog problem would disappear if all hunting dogs had microchips.”

Elias admits that although more Cypriot people are becoming aware about animal welfare he doesn’t see any serious improvement. “Poisoning is rampant in cats and dogs. Dumped animals are a daily phenomenon. For an island that relies on tourists to survive I am amazed that the authorities do not pay attention to what is being said about us in social media. I think they would find it alarming at how many people are boycotting Cyprus as a holiday destination due to animal abuse and the stray animal situation.”

How can you help?