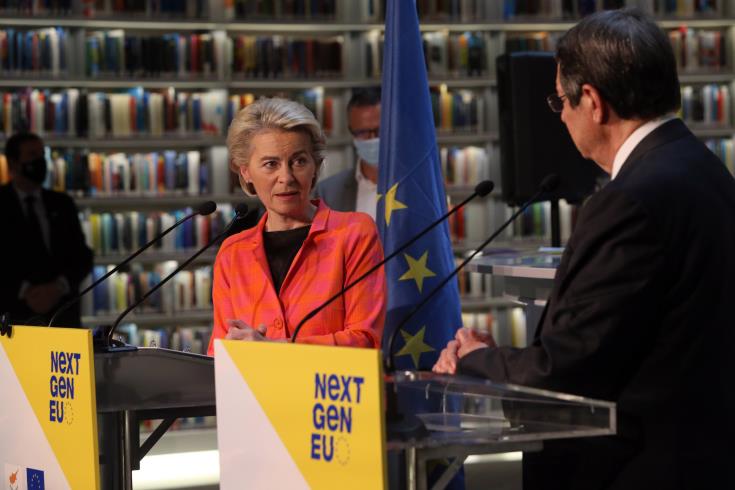 European Commission President Ursula von der Leyen urged young people on Thursday to get vaccinated in the fight against the coronavirus, stressing that the vaccines are effective and protect against mutations.

She was speaking during a public discussion with President of the Republic of Cyprus, Nicos Anastasiades at the University of Cyprus. The two visited the university where the ceremony to deliver the approved evaluation of the Cyprus Recovery and Resilience Plan took place.

The two also paid a visit to “KIOS” Research and Innovation Centre of Excellence of the University of Cyprus, where von der Leyen talked to young researchers and was briefed about the pioneering research carried  out at the Centre, on intelligent systems and networks. They also watched a short video where government ministers presented the projects of their ministries that are included in the Recovery and Resilience Plan.

During the debate, von der Leyen, asked how the EU would handle a fourth COVID-19 wave, said that Europe is prepared for such likelihood through its vaccination programmes. At the same time, she added, the vaccines are effective, according to clinical trials and protect from virus mutations. The Delta variant, she added, is easily transmissible, however the older population and the vulnerable groups have been, to a great extent, vaccinated with Cyprus achieving vaccinations beyond 65%.

However, she said personal hygiene rules have to be kept as well as use of mask and maintaining distance.

She also said that in the medium and long term the EU has a big contract with a vaccine company and a new vaccine may be developed for a new round of vaccines, if necessary.

Finally, she urged young people to be vaccinated.

President Anastasiades said that Cyprus underwent an unprecedented disaster with the recent fires and that our efforts concentrate on measures to avert such disasters and strengthen our capability for immediate response.

He also said that the relevant authorities include in their plans ways to promote investments to upgrade our capabilities to handle fires faster and more effectively. One of the plans includes purchasing equipment and training programmes.

Among the investments planned are the purchase of a firefighting plane, according to the Cyprus Republic’s needs and another aircraft that will be purchased through state funds.

Answering questions, Von der Leyen said that the EU has a very ambitious plan for transport, digitization and smart connectivity, considered issues of the future, as well as issues related to alternative fuel sources to protect the environment and green growth.

Asked about the incentives that will ensue from the Recovery Plan in the field of Research, President Anastasiades referred to the remarkable achievements of the Cyprus research community, adding that the Excellence Centre plays a fundamental role in the fields of research and innovation as well as supporting other factors to participate in social change, leading the country to a green and competitive economy.

He also said that through the plan, activities in research and innovation will increase and provide the chance for more job openings in these fields.

Von der Leyen underlined the great significance which the EU attaches to education issues and margining of European universities. She concluded by saying the Cyprus RRP is the 15th plan to be approved.