US decision to lift arms embargo on Cyprus is not about Turkey, Garber says 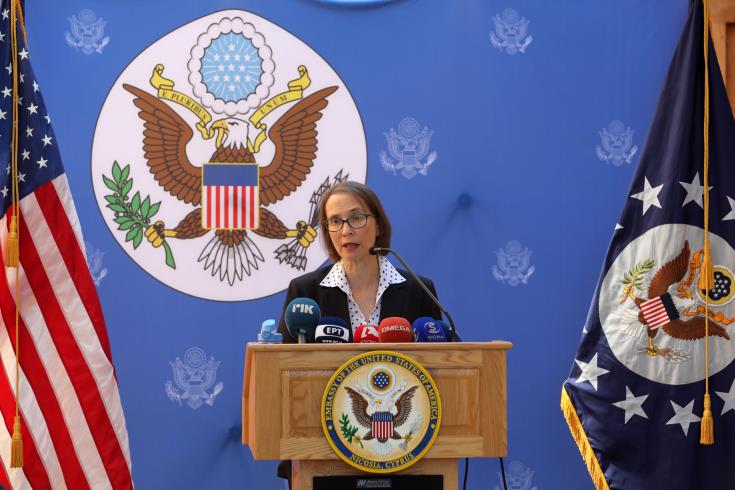 The US decision to remove blocks for one year on the sale or transfer of non-lethal defence articles and defence services to Cyprus is not about Turkey, but about greater security and stability in the Eastern Mediterranean and to counter malign actors in the region, US Ambassador in Nicosia Judith Garber told a press conference on Wednesday.

Asked about Turkish reactions, after the US Department of State announced on Tuesday US Secretary of State Mike Pompeo’s determination that granting a one-year waiver easing International Traffic in Arms Regulations (ITAR) restrictions for non-lethal items is in the national interests of the United States, Garber said that “the US informed Turkey of this decision last night”, and “we have urged that there won’t be an overreaction to this decision”.

Garber said that “Turkey is a very valued ally of the United States. It is a NATO ally and partner. We value our relationship with Turkey. It is a complicated one. But we do not have transactional relationships in the Eastern Mediterranean region. We value Turkey as a NATO ally. It is constructive with us for instance in the fight against ISIS. There are many areas we work well together but of course there are differences”, she added.

She noted that the exercise of the waiver authority is for one fiscal year, from October 1, 2020 through September 30, 2021 and stressed that this step strengthens our security partnership with the Republic of Cyprus and increases security in the EastMed.

Moreover, she said that “this decision does not reflect a change in the US position on a Cyprus settlement. We continue to support a comprehensive settlement to reunify the island as a bizonal, bicommunal federation which would benefit all Cypriots as well as the wider region”.

Noting that some may ask if the US is taking this step in response to the most recent developments in the region, the Ambassador stressed that the answer is “No”.