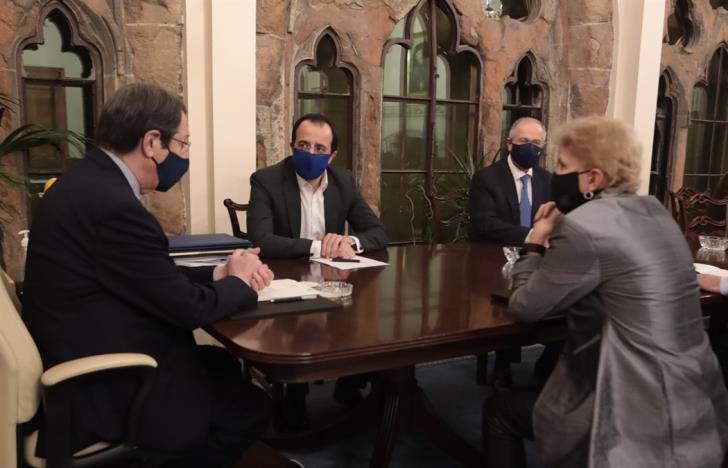 With April’s UN-brokered informal summit on the Cyprus problem just around the corner, the UN special envoy on the divided island on Monday begins a fresh round of talks in Nicosia.

Jane Holl Lute’s goal is to prepare the ground for the 5+1 informal meeting on April 27 to 29 in Geneva with the aim of paving the way for reunification talks to resume.

The substantive negotiations for a Cyprus settlement should be based on UN decisions and resolutions and not on recent calls by the Turkish side for a two-state solution in Cyprus, according to insiders.

Lute is scheduled to first meet with President Nicos Anastasiades who is expected to express his determination for reunification talks to resume from where they left off in Crans Montana three years ago.

He is also expected to stress the need for the EU to be present at the informal meeting, as Cyprus is and will remain an EU member state after the solution.

Lute will also have a meeting in the breakaway north with Turkish Cypriot leader, Ersin Tatar.

Prior to meeting the two leaders, Lute will confer with the UNSG’s Special Representative in Cyprus, Elizabeth Spehar to be briefed on developments and meetings taking place on the ground.

During her stay on the island, Lute is also expected to meet with the two sides’ negotiators.

On Wednesday, she will be visiting Athens to hold meetings with the Foreign Minister of Greece, Nikos Dendias, and other officials of the Greek Foreign Ministry.

Dendias will visit Nicosia late on Monday for talks with his Cypriot counterpart, Nikos Christodoulides, in the framework of the coordination between Nicosia and Athens on the Cyprus problem.

Cyprus is divided since  1974 invasion by Turkey which  still maintains troops in the breakaway north in full violation of UN resolutions.

Greece, Turkey and Britain are the Mediterranean island’s three guarantors and their participation in the upcoming informal summit will play a determining factor in its outcome.

By Annie Charalambous
Previous article
Paphos police looking for reckless driver, possibly under the influence
Next article
Transitioning back into a post-lockdown workplace