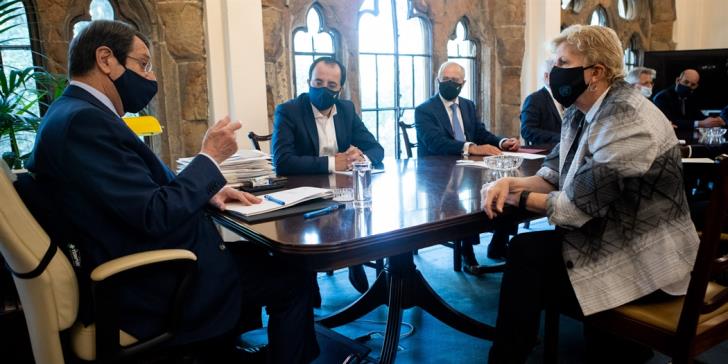 UN Secretary-General’s envoy on Cyprus Jane Holl Lute leaves the divided island on Wednesday after she pursued efforts to convene yet another conference on the Cyprus problem.

She had meetings in Nicosia with the leaders of the estranged Greek and Turkish Cypriot communities and insiders said she feels the time is not ripe for a new conference.

Even though she did propose some new ideas during her Tuesday morning meeting with Cyprus President Nicos Anastasiades and I the afternoon one with Turkish Cypriot leader Ersin Tatar.

Government spokesman Kyriakos Kousios said Anastasiades told Lute he was ready both for a new conference and for negotiations with the Turkish Cypriot leader for a solution based on what has been agreed upon up to now and in line with the UN Security Council Resolutions.

Tatar said after meeting Lute that “the sovereignty of the Turkish Cypriots” will not come up for discussion at the negotiating table.

Tatar leads a unilaterally declared state in the part of Cyprus controlled by Turkish troops since 1974, which is recognized only by Turkey.

The latest UN-led conference on Cyprus was held in Geneva in April with the aim of deciding the basis of negotiations to resolve the long-standing Cyprus problem.

UN chief Antonio Guterres said at the end of the Geneva meeting that “at the end of our efforts, we have not yet found enough common ground to allow for the resumption of formal negotiations,” and announced that he would convene another conference in the near future.

Before arriving in Nicosia, Lute had contacts with the so-called guarantor powers of Greece, Turkey and the United Kingdom. She is expected to report back to the Secretary-General on the outcome of her contacts.

Anastasiades has scheduled a meeting with Guterres on Friday on the sidelines of an EU summit in Brussels, which the UN chief has been invited to attend.