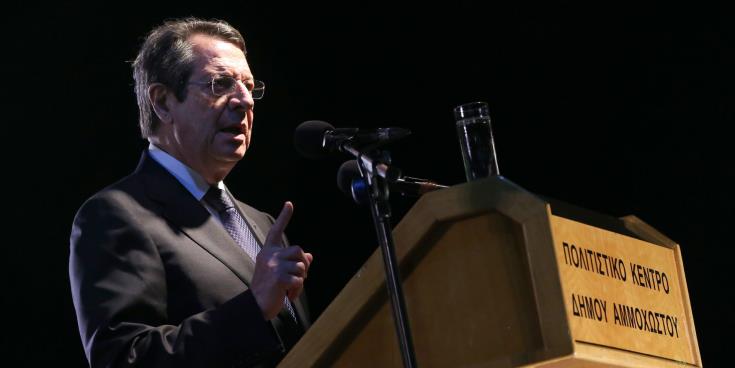 President Nicos Anastasiades, condemned Turkish provocations in Turkish-occupied Famagusta and in the exclusive economic zone of the Republic of Cyprus, noting that they will not remain unanswered.

He was addressing the anti-occupation rally of Famagusta Municipality, at the Municipality’s Cultural Centre in Deryneia and a short distance from Varosha, the fenced-off part of Famagusta on Saturday evening.

President Anastasiades said that the government will do everything possible in order to protect the city that has been awaiting its residents for the last 45 years.

He said that the goal in the next few days is “not to leave Turkey’s provocations unanswered. I will use my presence in the United Nations, I will use my intervention before the UN, I will meet with the Representatives of the five Permanent Members of the Security Council, the UN Secretary-General” the President noted.

He said moreover that European leaders have been also informed about the situation and the issue will be included in the European Council’s agenda, in October, upon the President’s request.

In his address, the President said that Turkish provocations undermine efforts to reach a Cyprus settlement. The violations of the sovereign rights of the Republic of Cyprus in the exclusive economic zone and Turkish threats to open Famagusta for settlement do not leave us, the international community or the EU indifferent.

These actions are responsible for preventing a solution that will reunite our country, allowing Greek Cypriots and Turkish Cypriots to live peacefully, he added.

The President also referred to statements made by the Turkish Foreign Minister Mevlut Cavusoglu, which, he said, aim at wrecking the latest effort made with the Turkish Cypriot leader Mustafa Akinci, on August 9. These statements reveal Turkey’s intentions and intransigence, the President noted.

He also said that it is not only up to the Greek Cypriot side to demonstrate good will or resoluteness and pointed to “what the other side does in order to wreck the new effort, the same way they wrecked the effort made at Crans Montana.”

The President said he was determined to work for a functioning and viable Cyprus settlement, with political equality, as defined by UN resolutions and not according Turkey’s interpretation which will allow Ankara to “turn the whole of Cyprus into its own protectorate.”

At the same time, President Anastasiades said he was not ready to propose a solution to the people of Cyprus that would humiliate them, or that would not allow people to accept it. We need to achieve a settlement that will be accepted by the Greek Cypriot, as well as the Turkish Cypriot community, he noted.

Referring to Alexis Galanos, the former Mayor of Famagusta who passed away in the summer, President Anastasiades said that he was a dear friend and a politician who loved his city and associated his political career with the struggle to return Famagusta to its legal residents.

In statements before the event, President Anastasiades said moreover that the Republic of Cyprus is ready to avert any Turkish moves though all legal means in its disposal, and “as the UN commands.”

The event was attended, among others, by the Minister of Justice Giorgos Savvides, Government Spokesman Prodromos Prodromou, members of the parliament, state and party officials as well the Mayor of Famagusta Simos Ioannou and members of the city council.

From his part, Ioannou told those present that the Municipality aims at undertaking immediate and effective action to counter Turkish provocations, acting at every level in order to avert new faits accomplis.

In his address, he referred to the Municipality’s mobilization in Cyprus and abroad and said that “we already started contacts on a political level.” He also said that the city council met with the Foreign Minister and in cooperation with the Famagusta Chamber of Commerce they will prepare a record of properties. He added that they will also have meetings with President Anastasiades, the Special Representative of the UN Secretary-General in Cyprus, Elizabeth Spehar, and foreign Ambassadors.

The Mayor repeated finally his call to the President of Cyprus to convene an extraordinary session of the National Council, to address exclusively the issue of Famagusta and relevant developments and formulate collective action.

In the period ahead, Famagusta Municipality will highlight the issue on an international and European level, calling for support and for the relevant UN resolutions to be implemented, Ioannou concluded.

By In Cyprus
Previous articleHeavy rain on Limassol-Platres road, drivers urged to be careful
Next articleScores of tigers rescued from infamous Thai temple have died – media