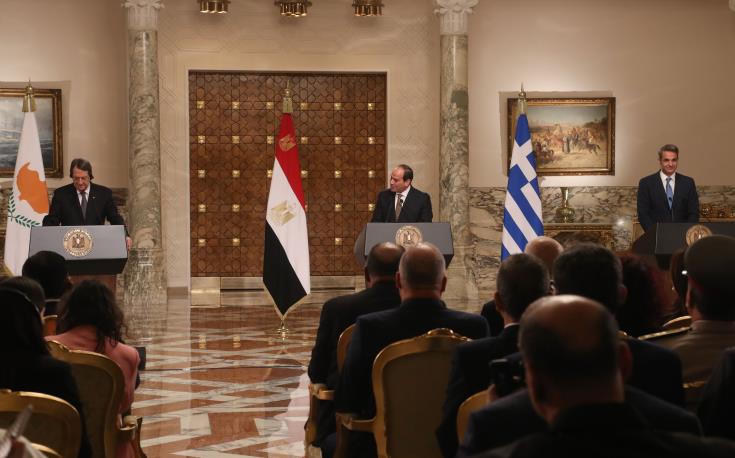 The Cairo Joint Declaration condemns, in the most clear and unequivocal way, the illegal Turkish actions in Cyprus’ EEZ, calling for their immediate termination and the need to respect the sovereign rights of the Republic of Cyprus, as stressed by President of Cyprus Nicos Anastasiades during a joint press conference in the framework of the 7th trilateral meeting between Greece – Cyprus – Egypt.

At the same time, Egyptian President Abdel Fattah el-Sisi spoke about escalation and developments in the Middle East due to unilateral actions aimed at disturbing the stability of the countries in the region.

“We have emphasized that security and stability is a strategic priority for all and co-ordination is needed and without it we cannot enjoy the fruits of the trilateral cooperation mechanism,” he said.

Greek Prime Minister Kyriakos Mitsotakis said that there is coordination on the issue and referred to US Secretary of State Mike Pompeo`s support for Cyprus’ rights in its Exclusive Economic Zone (EEZ).

President Anastasiades who briefed the two leaders on the issue and efforts underway to resume negotiations, said that “Turkey`s latest unacceptable actions and its intention to carry out exploratory drilling within internationally recognized and licensed blocks of the Republic of Cyprus, not only mar the climate and escalate tension, but are also a blatant violation of its sovereign rights”.

He told his interlocutors that we are “determined to use all diplomatic means in order to put an end to the Turkish violations and to fully respect the continued exercise of the sovereign rights of the Republic of Cyprus”.

He added that cooperation in the energy sector is based on the fundamental principle that the discovery of hydrocarbons can and should act as a catalyst for wider regional cooperation, prosperity and stability of the Eastern Mediterranean.

“Turkey`s unilateral and unacceptable actions are far from these principles, while at the same time are threatening stability, peace and security in the already turbulent Eastern Mediterranean,” he said.

He expressed confidence that they would have the strong support and solidarity of the international community and the EU, so that international law could be restored.

Anastasiades conveyed his gratitude to the leaders of Egypt and Greece for the strong support that the Republic of Cyprus currently enjoys against the Turkish challenges, as recorded in the Joint Declaration.

The President of Egypt reiterated the country`s support for the Cypriot Government`s efforts for a peaceful settlement of the Cyprus problem.

Prime Minister Kyriakos Mitsotakis underlined Greece’s full support for finding a just and viable solution to the Cyprus problem based on the bi-zonal, bicommunal federation and UN resolutions, and said all three countries are in favour of the resumption of talks.

He added that the three countries have condemned Turkey`s illegal actions in the Cypriot EEZ that violate international law and cause tension. He also condemned Turkey`s provocative behavior in the Aegean Sea, “which is also against the international law and good neighbourly relations”.
Mitsotakis said he raised these issues to the US Secretary of State last Saturday.

“I think it is worth noting his two clear and official positions both in support to protect Greece`s national security and against illegal drilling in Cyprus’ EEZ and Block 7,” he said.

He also referred to his bilateral meeting with President Anastasiades, following the Greek Foreign Minister`s visit to Cyprus. He said that they discussed the intention announced on behalf of Turkey for Varosha  that violate the Security Council decisions and, while Turkey is proceeding with another illegal action in the maritime area that is not only within the Cypriot EEZ but has been delimited and licensed to European companies.

“And I want to assure everyone that we are in constant contact, co-operation and coordination with Nicosia for the necessary actions, with a view to the Summit on October 17, as we are working with all our European and international allies,” he said.

The leaders of Cyprus and Egypt also welcomed the agreement on the avoidance of double taxation between the two countries.

On the energy field the three leaders welcomed the establishment of the Eastern Mediterranean Gas Forum to co-ordinate the energy policy of seven countries in the region.

President Anastasiades said the strong will to reinforce co-operation was reaffirmed through a series of new agreements on gas exploitation and transportation.

They also welcomed the establishment of the East Mediterranean Gas Forum and the recent signing of the framework agreement between the Egyptian Electricity Authority and the Euro- Africa Interconnector.

According to sources, Greece and Egypt will make another attempt to demarcate their maritime zones, a development which will also benefit Cyprus in case of success.

Concerning environmental protection, President Anastasiades briefed his interlocutors on the regional initiative announced by the Republic of Cyprus for coordinating the actions of the Eastern Mediterranean and the Middle East countries on climate change.

The relations between Egypt and the European Union, as well as the challenges of illegal immigration and terrorism for the wider region, was also part of the agenda with the three leaders agreeing that further steps should be taken to address these issues.

The three leaders expressed also common positions on the issues of Libya, Syria and the conflict on Middle East.

Further the leaders highlighted the countries` relations in the field of diaspora and the success of the NOSTOS programme.

It was also agreed to sign a Memorandum of Understanding for Cooperation between the Cyprus Foreign Ministry and the Diplomatic Institute of Egypt, which will contribute to closer cooperation in the field of education and training of diplomats.

A trilateral agreement on cooperation in the fight against the illicit trafficking of cultural goods was also concluded as part of the trilateral meeting.

It was also stressed the need to establish a permanent secretariat in Nicosia as soon as possible to support all initiatives taken at political level.

By In Cyprus
Previous article
Mona Lisa’s smile a touch clearer through Louvre’s new protective glass
Next article
Mainly fine today, temperatures to edge up over next few days