The Cyprus problem must be resolved, the Republic’s Ambassador to the UN tells a High-Level Meeting on Peace-building 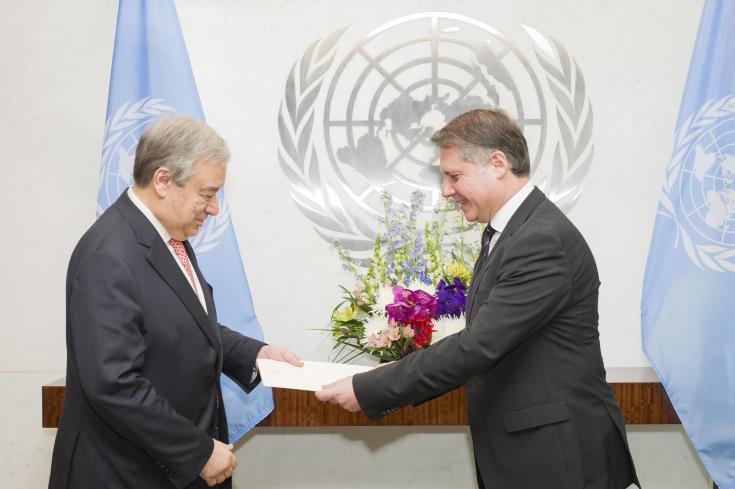 The Cyprus problem must be resolved, the Republic’s Permanent Representative to the UN Kornelios Korneliou has told the High-Level Meeting on Peace-building and Sustaining Peace, convened by the UN General Assembly President Miroslav Lajcak on April 24 and 25. The main aim of the Meeting was to evaluate the initiatives undertaken until now as well as the opportunities ahead with regard to boosting the UN role in peace-building.

In his speech at the Meeting on Wednesday, Korneliou underlined that the agenda on sustaining peace constitutes part of a broader effort aiming to boost the UN system`s coherence and face the causes of conflicts and new threats and challenges. Referring to the Cyprus problem, the Permanent Representative underlined that it continues to constitute an issue which concerns world peace and security, due to Cyprus` ongoing foreign occupation and violent division, in violation of the UN Charter and the international law.

He expressed appreciation for the role of the UN peacekeeping force in Cyprus (UNFICYP) and stressed that its presence is necessary until a comprehensive settlement is reached.

Furthermore he said that Cyprus remains focused on finding a solution, on the basis of the UN relevant resolutions, and that the UN remains the forum through which a comprehensive settlement can be reached and must continue to be the driving force of efforts to reunite Cyprus.

He stressed that a just and durable settlement will benefit the people of Cyprus and will effectively contribute to broader efforts to maintain an environment of peace, stability and welfare in the region.