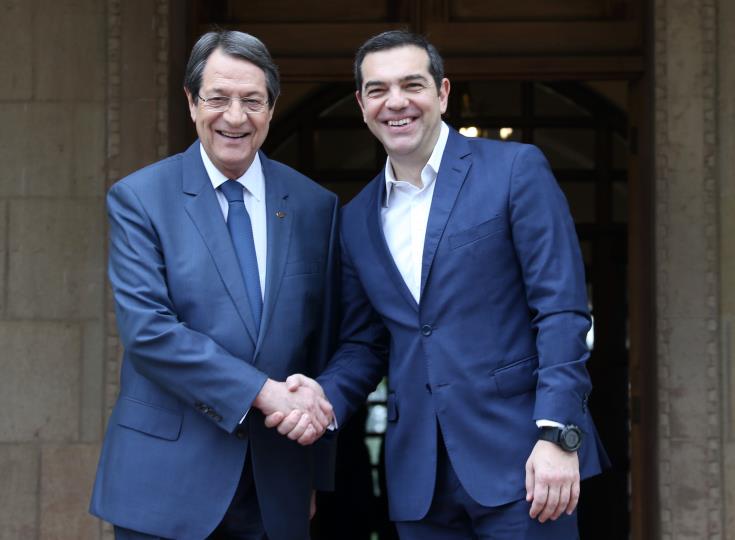 President Anastasiades congratulated on Wednesday the Prime Minister of Greece Alexis Tsipras “for his courage and determination” as regards the Prespes Agreement, noting that the ratification of the Agreement terminated an unnecessary conflict.

Welcoming Tsipras, Anastasiades noted that the ratification of the Prespes Agreement opens the doors for cooperation and the road for peace and stability in the Balkans, creating prospects for a balanced and stable relation with Northern Macedonia, something which will allow a closer financial cooperation and the creation of a new environment.

On his part, the Prime Minister of Greece referring to the Prespes Agreement  noted that a historic step was made and that they solved a conflict which went on for decades “in the best possible way for our national interests.”

“This is an important development and I think that it will help our effort to pursue  a just and viable solution of the Cyprus problem in the framework of the international community, the UN,” he added.

Moreover, he thanked Anastasiades for hosting on Tuesday the 5th Summit of the Southern EU Countries, noting that unity and coordination among the countries of the European south is very important for Europe.

He noted that “our region is unfortunately particularly destabilized and Cyprus together with Greece and all the other EU countries has proved  that it is fighting for stability, it constitutes a pillar of stability.”

Tsipras expressed strong support to the peaceful settlement of conflicts and to cooperation among countries, noting that these messages were sent out by the Summit of the Southern EU Countries on Tuesday, in the best possible way.

On his part, Anastasiades wished Greece all the best and noted Tsipras’ efforts for the ratification of the Prespes Agreement, adding that when there is courage, pragmatism and dialogue then there are prospects to terminate unjustified conflicts.

He said that the agreement reflects not only the determination, but also secures the prospects for excellent relations and cooperation, adding that cooperation already exists.