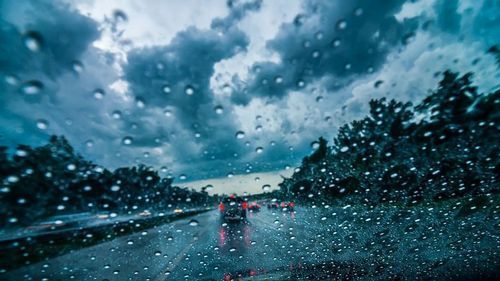 The met office has issued a yellow alert warning of heavy rain over the next 24 hours while police urged drivers to be particularly careful.

There have been eight traffic accidents on the Limassol-Nicosia highway near Kakoratzia because of hail. One of the lanes in each direction had temporarily closed but have since reopened.

There have been no serious injuries. A police spokesman said two of the cars involved were police patrol cars which had gone to the area to warn drivers and were hit by cars after their drivers lost control on the slippery surface.

In an early morning announcement, the met office said rain and isolated thunderstorms are expected to affect the area especially during the morning and late in the afternoon on.

The total rain accumulation is locally likely to exceed 55 mm in a 24 hour period.

The yellow alert is in force from 6 am on Thursday to 6 am on Friday, it added.

Police said there are problems on the road network because of the weather throughout Cyprus and appealed to drivers to be particularly careful.

Because of snow the Prodromos-Troodos, Karvounas-Troodos and Platres-Troodos roads are open only to vehicles with four wheel drive or those equipped with snow chains.

Drivers are urged to the drive slowly, to keep a safe distance from other vehicles and to comply with traffic signs and the instructions of police officers.

Updates on road conditions are available on the police app, its social media pages and its website  www.cypruspolicenews.com.

Low pressure centered over Crete is moving southeast. Thursday will be mainly cloudy with rain, at times heavy and protracted mainly in the morning and late in the afternoon, and isolated thunderstorms and snow in the mountains. Thunderstorms may be accompanied by hail.

Temperatures will be 15 C inland and on the south and east coasts, 14 C on the west and north coasts and 3 C in the mountains.

Friday and the weekend will be partly cloudy and at intervals cloudy with scattered showers and isolated thunderstorms and snow in the mountains.

A the time of issue of weather bulletin there was 44 cm of snow on Troodos Square.