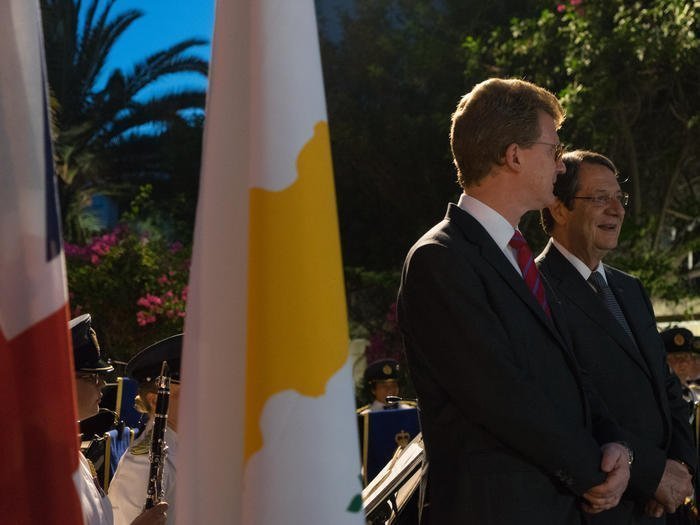 The United Kingdom, as a Guarantor Power and a Permanent Member of the Security Council, has a vital role to assume when the Cyprus negotiations resume, President Nicos Anastasiades has said.

Addressing on Thursday evening an event at the High Commission of the United Kingdom οn the occasion of the celebration of the Birthday of Queen Elizabeth, the President pointed out that the UK has a role to play particularly as regards the external dimensions of the settlement and the need to end, as the Gutterres  framework prescribes, the Treaty of Guarantee and establish robust implementation and oversight security mechanisms of the implementation of the settlement.

The President reiterated once again that he remains strongly committed to negotiate a solution within the six-point framework that the Secretary – General has set as a basis for discussions, the relevant UN resolutions and the EU values and principles.

‘’In this respect, I do hope that the pending arrival of a special envoy of the UN Secretary- General will soon take place, so as to assess, through consultations with all relevant parties, if the necessary conditions for the resumption of the process are in place. Hence, it is of utmost importance that all sides refrain from any further actions which will negatively affect the prospect of resuming negotiations,’’ he said.

The President expressed his gratitude for the United Kingdom’s principled stance on the Cyprus Issue and its support on our efforts to reach a comprehensive settlement.

President Anastasiades also referred to the long-lasting friendship and strong ties between UK and Cyprus and their peoples, pointing out that the two countries share a deep-rooted history based on respect, mutual understanding and shared values on democracy and human rights, tolerance, respect of law and good governance.

He referred to the large Cypriot community in the UK of more than 300,000 Cypriots, which makes it the largest Cypriot community overseas, with the UK also being one of the most favourite academic destination to thousands of Cypriot students.

Likewise, he added, around 60,000 Britons permanently reside in our island, while Cyprus is the preferred tourist destination to more than one million British tourists every year.

He also referred to the future relation and partnership between the European Union and the United Kingdom.

‘’Cyprus is part of the consultations and process currently underway. To this end, I take this opportunity to reiterate our sincere commitment to support  the efforts in establishing a mutually beneficial future partnership between the EU and UK, as well as to work closely with Her Majesty’s Government towards ensuring that our two countries forge an even closer and reinforced bilateral relation’’, he said.

The President also said that he is convinced that despite evident challenges, the only way forward is to engage in regular dialogue in order to redefine the web of our relations and to provide further impetus towards strengthening our cooperation.

UK High Commissioner Stephen Lillie in his address said that the membership of Cyprus and the UK in the Commonwealth is one of the many special bonds between the two countries, adding that the core values of the Commonwealth, are values shared by both countries, such as democracy and human rights, tolerance, understanding and respect, the rule of law and good governance.

He said that although the UK will  leave the EU, these shared values and shared interests will not change. As a government, the High Commissioner said, we are committed to conclude a new and special partnership with the EU.

‘’As the High Commissioner I am committed to build an even closer and stronger relationship between Britain and Cyprus, we will work to expand our engagement across a whole range of areas, embracing the economy, security education and people to people links’’, he added.

The High Commissioner also reiterated that his country will continue to support a just, democratic and lasting solution to the Cyprus problem, ‘’building on the progress made in Crans Montana towards establishing a bizonal bicommunal federation as set up in the relevant UN Security Council resolutions’’.

‘’Britain remains a strong supported and contributor to UNFICYP which plays a vital role in ensuring peace and stability on the island,’’ the High Commissioner concluded.

By In Cyprus
Previous article
Tougher penalties for child molesters
Next article
Boris: Brace for a possible “Brexit meltdown” but don’t panic