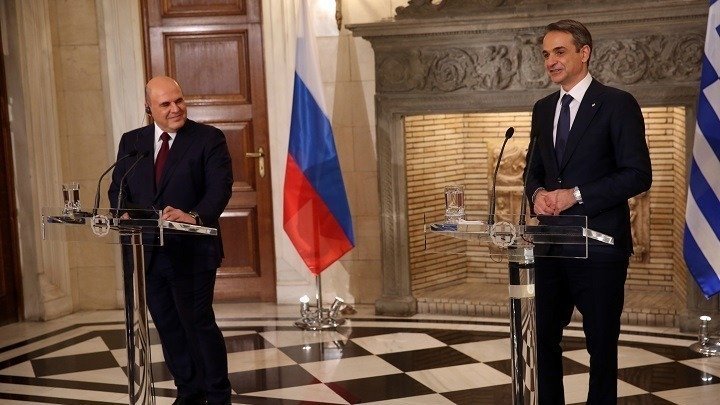 Greek-Russian relations have come from the far past and can extend far into the future, Prime Minister Kyriakos Mitsotakis said on Wednesday following a meeting with visiting Russian Federation Prime Minister Mikhail Mishustin.

Mishustin arrived in Athens at 14:00, welcomed by Finance Minister Christos Staikouras and an honor guard, for the bicentennial of the Greek Revolution (1821) against the Ottoman rule.

Calling the visit one of special importance, Mitsotakis referred to the 2021 Greece-Russia Year, and to the” historic, cultural and religious ties of the two countries that began in Byzantium, became closer through Greek communities in Russia, and led to an alliance when the Greek Revolution broke out in 1821.”

“As time passed, international relationships and geopolitical circumstances brought the countries either more or less close, but never broke down the historic ties of our peoples,” he added, saying that humanity’s great challenges found the countries on the same side.

Russia is a significant factor of European stability, continued the Greek premier, which needs to be built on in collaborative rather than competitive grounds, and needs to respect joint values such as the protection of human rights. “Contemporary and asymmetrical challenges like terrorism, extremism or facing climate change jointly may be met through a joint stance, not through confrontations,” he underlined, stressing Russia’s role as a permanent member of the UN Security Council in global peace and legality.

Mitsotakis said Greece took into great account Russia’s commitment to the power of international law, of the Law of the Sea, especially in the Mediterranean area, and appreciated the Russian Federation’s consistent support toward a solution to the Cyprus issue based on a unified, bizonal and bicommunal state without foreign forces and anachronistic guarantees.

The Greek premier said that the two leaders also discussed extending economic collaboration, and trade in particular, and how to restart Russian tourism to Greece.

On his part, Russian PM Mishustin said that the 200th anniversary was “a joint celebration for Russia and Greece”. It was fitting that “the first governor of Greece, Ioannis Kapodistrias, was the Russian Empire’s Foreign minister,” he pointed out.

The celebrations of year 2021 between the two countries comprise the fourth such year between them and is devoted to history. “The year’s official inauguration will come shortly, and the citizens of our countries will have the opportunity to become acquainted with our common history, Mishustin said.

Russia’s premier also said the two leaders “confirmed our mutual interest in promoting joint projects in various sectors” and noted the repercussions of coronavirus on several collaborations: “Joint trade dropped by a third, and tourism was deeply harmed. Greece is opening its borders gradually, but this must occur safely. The joint interministerial committee on economic an industrial collaboration must assume measures to enforce bilateral cooperation.”

PM Mishustin also noted that the two countries’ plans included agreements on health, technology and informatics. “We shall strengthen bilateral relations, based both on the contemporary picture and based also on our history and tradition,” he noted, congratulating Greece on its anniversary.