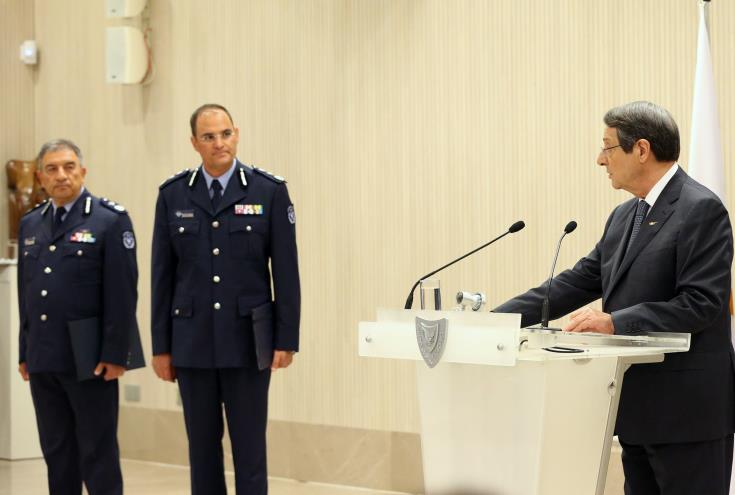 The government wants to see a transformation of the Police, through bold and radical reforms into a modern, flexible and efficient organization, President Nicos Anastasiades stressed on Tuesday, noting a reduction last year in the number of serious offences and an increase in the detection rate.

Speaking during the ceremony for the appointment of the new Chief and Deputy Chief of the Police, Stelios Papatheodorou and Christos Mavris held at the Presidential Palace, Anastasiades said that that the government has managed through the innovative approaches that it adopted to achieve the upgrading, for the first time since 1960, of the Police structures and the promotion of its functional and operational efficiency and effectiveness.

He noted that a process for the restructuring of the Police is underway and includes the drafting of a modern model of policing and operation, a modern framework for education and development, and a new framework for managing human resources.

At the same time, he admitted that undoubtedly there have been and there are weaknesses as regards the operation of the Police which made him take some painful decisions, without, however, ignoring the positive contribution of anyone.

Addressing Papatheodorou and Mavris, the President said that they are called upon to show their full commitment to the Constitution and to the laws in order to respond with devotion to the important mission of the Police.

The President also elaborated on the actions and measures taken with a view to strengthen the Police and give them more tools to combat crime and offences.

On his part, the new Police Chief pledged that they will work in cooperation with all the Police leadership and other staff to accomplish their mission, as provided by the Constitution and the relevant laws, with a view to maintain public order and security.

He stressed that “our priority is to establish conditions of security in society, something which is a precondition for freedom and the exercise by citizens of their rights.”

By In Cyprus
Previous articleGoogle removes ads served to users seeking voting info for ‘misrepresentation’
Next articleWeber: EU will not be blackmailed by Turkey on Cyprus