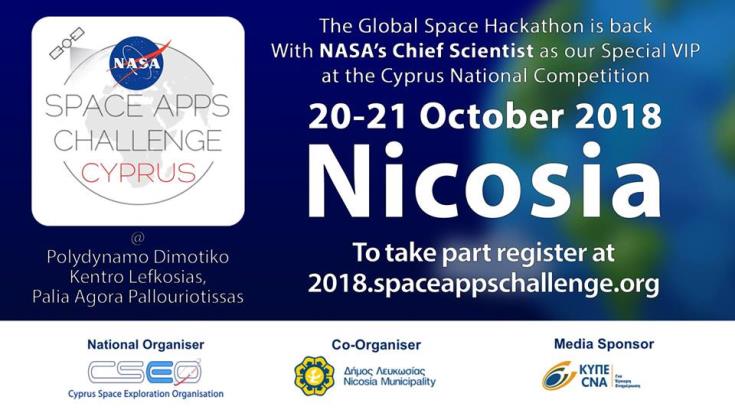 Cypriot teams participating in this year’s local NASA Space Apps Challenge will have the unique opportunity to be mentored by NASA’s Chief scientist James Green. The competition is brought to Nicosia by the Cyprus Space Exploration Organisation (CSEO).

In statements to CNA, CSEO President George Danos said that “NASA Space Apps is back in Cyprus and the NASA Chief Scientist will mentor our teams in their projects. That is an outstanding opportunity for Cyprus. When we first started Space Apps we never thought we would have the Chief Scientist of NASA here with us guiding our teams”.

And this year, he added, “we have brought an exclusive challenge to Cyprus. One that would see a Cypriot team being invited by NASA to visit their Space Centre again this year”.

“Cyprus can excel and we are making sure that we provide the right stimulus and springboard to help our talented youth to reach for the stars,” he said.

Space Apps is an international hackathon that occurs over 48 hours in many cities around the world. The competition brings together people of diverse scientific backgrounds, in order to address engineering issues through specific challenges. The NASA Space Apps Challenge is the biggest event for the development of innovative and space oriented ideas.

The winning teams of the international challenges will represent Cyprus at the International Space Apps Challenge.

The NASA Space Apps Challenge is hosted by the Municipality of Nicosia.

CNA acts as media sponsor of the competition.

In order to take part in NASA Space Apps Nicosia you must register at: https://2018.spaceappschallenge.org/locations/nicosia
The opening ceremony will take place on Saturday May 20, between 11.30 am – 12:30 pm. The teams will then begin their work until Sunday afternoon when they will present their project to the judges. The winner of the international challenge and the winner for the Cyprus challenge will be announced on Sunday afternoon.

Announcing the first prize to the Cypriot team, NASA said that , “ArachnobeeA from (Limassol, Cyprus) designed a spider-bee drone for small cargo transport with a grab and capture capability and the ability to dock and release”.

ESA astronaut Paolo Nespoli has described ArachnoBeeA’s project as an `innovative and clever concept`, saying that their drone has many possibilities and one day if it is sent to space, it would be of great use to the ISS astronauts.

Last year, a Cypriot team of students called Nestfold won the first prize in the international NASA space apps challenge competition, in the people’s choice category. Their idea is a deployable NestFold capsule that can be air-dropped in areas suffering from natural disasters rescuing victims from fire, flood, landslide, earthquake etc.

In 2013 Cypriot project MarsSense, which was the winner of the Space Apps Limassol 2013, was given the second international award in the category People`s Choice Award of the NASA International Space Apps Challenge. The Cypriot team of MarsSense was invited in 2014 to the biggest space conference, called Space Ops, which is organised by NASA. There, the Cypriot team presented its work and was excelled as one of the four leading academic projects related to Space Exploration for the biennium 2013-2014.

It is noted that NASA`s Chief scientist James Green is in Cyprus also to take part in an International Space Summit organised by the Cyprus Space Exploration Organisation (CSEO).

On the occasion of his visit, a series of activities will take place organised by the US Embassy in Nicosia such as a lecture at the University of Cyprus and visits to schools.

“In cooperation with the US Embassy the opportunity will be given to the wider public to see and hear close up this leading scientist”, Danos told CNA.

The International Space Summit will take place on October 15-19. During their meetings in Cyprus, they will discuss and decide the future of Mars space missions as well as international cooperation. The summit will be attended by top-level scientists, such as the Chief Scientist of NASA James Green, the Director of Space Research Institute of Russia, the Minister of State of Advanced Sciences of the UAE, and other top officials and scientists from Europe, India and China.