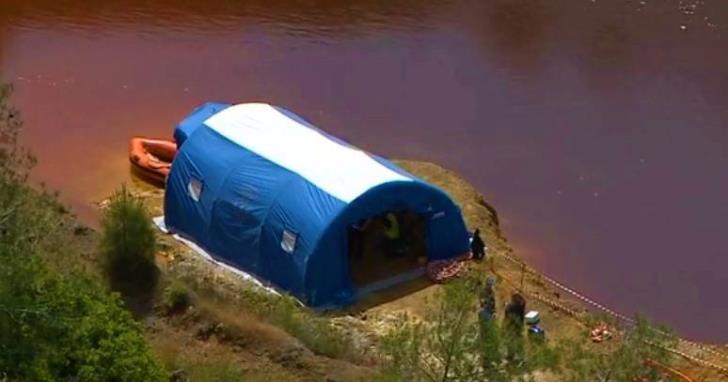 An operation is underway at an acidic lake in Mitsero to retrieve two suitcases as authorities search for three of seven murder victims.

A 35 year old Greek Cypriot army officer has admitted to killing five women and two children. He told police he had stuffed the bodies of three of his victims — Livia Florentina Bunea, her eight year daughter Elena Natalia and Maricar Valdez Arquiola — in suitcases and dumped them in the lake.

At around 1 pm a diver entered the lake and the first suitcase was recovered around 2 pm, CyBC said.

On site is state pathologist Nicolas Charalambous. The suitcase, which is understood to contain a body, is being transferred to the morgue.

Police chief Zacharias Chrysostomou visited the site earlier on Sunday and was briefed on the operation.

Police have set up a command centre at the lake.  A boat has been out to the spot.

CyBC said that the operation is expected to be lengthy because of mud at the bottom of the lake.

Meanwhile, specialist divers are expected to resume their search at a lake in Xyliatou where the suspect said he dumped the body of six year old Sierra — daughter of Marry Rose Tiburcio whose body was found in an abandoned mine shaft in Mitsero on April 14.

Police have so far recovered three bodies. A second body found in the flooded mine shaft is believed to belong to Arian Palanas Lozano  from the Philippines, but the results of DNA tests are still expected for final confirmation.

Authorities have also retrieved a body from a dry well at the Orounta firing range. Identification is still pending, but the suspect has told police it belongs to a woman from Nepal.

Meanwhile there are reports that a badly decomposed body of an Asian woman found in the Turkish occupied north may be linked to the same suspect. The body was found in January 2019 and has still not be identified.

Cyprus is reeling from the murder spree and there have been repeated calls for the resignation of the Justice Minister and the chief of police over the way police had initially handled the issue when the women were first reported missing.