Let us not follow the course of action that Turkey seeks, President says 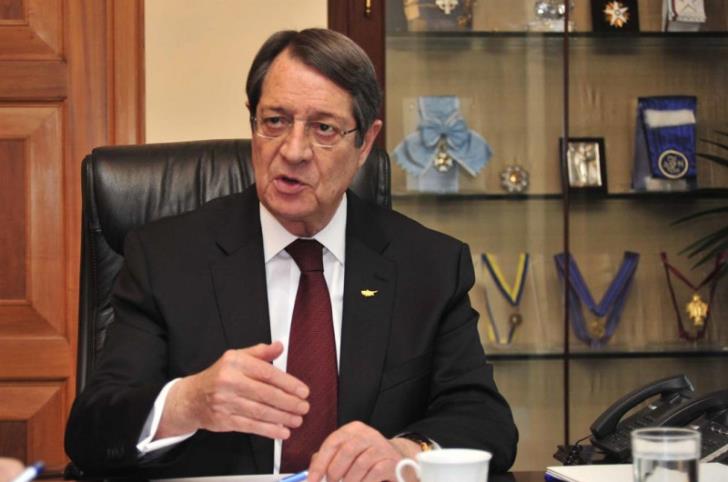 Cyprus President Nicos Anastasiades spoke on Monday against following the course of action of provocation sought by Turkey.

President Anastasiades was replying to journalists’ questions on his arrival for the AGM of the Union of Cyprus Municipalities.

Reacting to a comment by a journalist that Turkey has been increasing the tension, he said he wishes to ask for restraint. “Let us not follow the course of action sought by Turkey, that is to say of provocation,” he noted, adding that certainly, Turkey’s plans should not be overlooked and the necessary steps should be taken in the framework of international law.

Asked whether this will be done in concert with Athens, President Anastasiades said “of course in concert, not just in a very close cooperation with Greece`s government but also with the EU and of course with friendly countries we cooperate with.”

Turkey recently signed a memorandum of understanding with the Libyan Government of General Accord (GNA) for the delimitation of their exclusive economic zones, in a move considered by both Cyprus and Greece as violating the sovereign rights.  President Anastasiades said last week that Cyprus will resort to the International Court of Justice in The Hague in a bid to protect its sovereign rights against Turkey’s illegal actions.

Cyprus has signed delimitation agreements with Egypt, Israel and Lebanon, while following natural gas discoveries in the Eastern Mediterranean, it has formed trilateral cooperation mechanisms with countries of the region, such as Israel, Greece and Egypt.

After a tripartite meeting, in Berlin, between Cyprus President, UN Secretary General Antonio Guterres and Turkish Cypriot leader Mustafa Akinci, on November 25, Guterres issued a statement saying that he has “agreed to extend my efforts to achieve terms of reference to serve as a consensus starting point for phased, meaningful, and results-oriented negotiations at the earliest feasible opportunity.”

By In Cyprus
Previous article
Top-5 Kids Menus in Cyprus
Next article
Cyprus GDP records growth of 3.4% in Q3