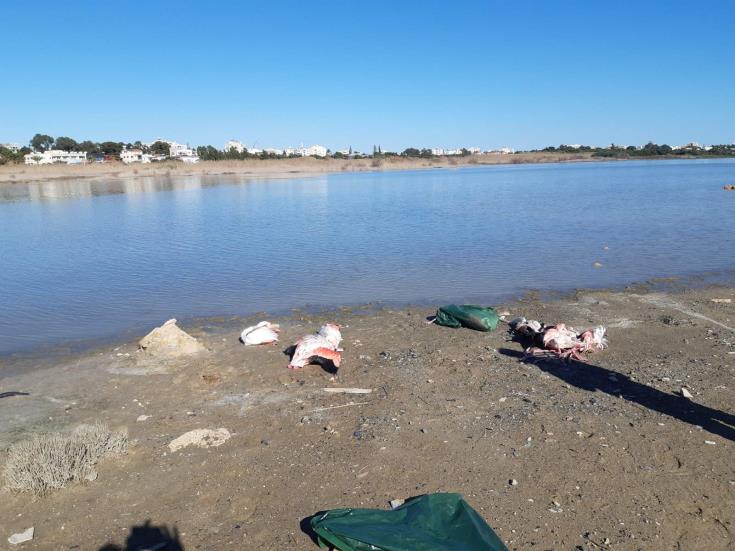 The death of flamingos at Larnaca salt lake has been confirmed as being due to lead poisoning, BirdLife Cyprus said on Tuesday and urged authorities to set in motion a clean up the soonest possible.

During heavy rains  water levels rise, flooding areas affected by a shooting range which has since been moved. As a result flamingos are exposed to the presence of pellets in the mud as they look for food.

“The initial estimates of the authorities as to the reason for the deaths of flamingos at the salt lake have unfortunately been confirmed,” the NGO said in a post on Facebook.

Examination of all the birds have led to the discovery of lead pellets in their stomach as well as fatal levels of lead in their liver, it said.

“The continued presence of lead in the lake years after the closure of the shooting range and the clean up of the salt lake shows — this time in a tragic way — the urgent need to manage the area, not only for the definitive removal of lead from the wetland but to deal with the persistent problems which downgrade the area such as the presences of effluents, the large number of stray cats and the nuisance causes,” it added.

BirdLife Cyprus called on competent authorities to set in motion the sooonest possible — that is as soon as water levels allow — a clean up of the salt lake so as to remove the lead once and for all.

Lead is extremely toxic not just for birds but for the soil and water and by extension for human health. The use of lead pellets within 300 metres of wetlands, salt lakes and dams is prohibited in Cyprus, it concluded.

More than 2o dead flamingos were found at the salt lake last month which, pending the results of tests, the Game Service attributed to a combination of lead and increased stress because of the cold.