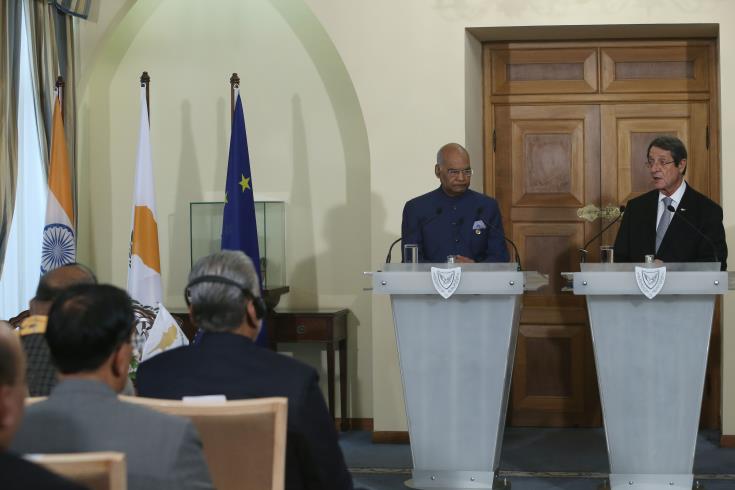 Speaking after talks in Nicosia with President Nicos Anastasiades, Kovind referred to further enhancing the already special ties between the two countries, in particular in the field of financial and economic partnership as well as other fields including IT.

He thanked Cyprus for supporting India becoming a permanent member of the UN Security Council.

On his part, President Anastasiades expressed gratitude and appreciation to the Indian President and his government, for the principled stance and important support they offer to Cyprus in its efforts to reach a comprehensive settlement to reunite the country in a modern and truly independent state, free from any foreign dependencies.

He assured of his determination to further enhance the historically excellent relations of the two countries.

In his remarks, President Anastasiades  said India and Cyprus enjoy a long-standing deep-rooted friendship and ties based on shared values and mutually beneficial partnerships, both at the level of Government and of our two societies.  He said it is a “relationship which we greatly value and one which we jointly aspire to further reinforce and strengthen”.

In this respect, the exchange of visits at the highest level, the enhancement of our institutional legal framework of co-operation through today’s signing of Memoranda of Co-operation in the fields of Financial Intelligence and Environment, in addition to the four bilateral agreements signed during his visit in April 2017 in India, “is a testament of our resolve to explore new areas of beneficial co-operation, as well as enhance existing ones, to the benefit of our countries and peoples”.

Today, he added, they discussed “a number of issues in a wide spectrum of bilateral interest and identified specific areas on which we can work together to further solidify our partnership.”

In this regard, the President said, “we agreed to establish a Ministerial Working Group to oversee the conclusion of pending bilateral agreements and ensure the optimum implementation of existing ones, particularly those in the fields of economy, merchant shipping, investments and tourism. We also explored ways and means of further enhancing our diplomatic dialogue within international fora.”

President Anastasiades said they discussed the issue of the UN Reform and agreed on the need to ensure that the Security Council continues to play an effective role in maintaining international peace and security as envisioned in the UN Charter.

They reaffirmed support for the conclusion of a UN Comprehensive Convention on International Terrorism that advances and strengthens the framework for global cooperation, while, in line with their shared commitment to preventing the proliferation of weapons of mass destruction and their means of delivery, the President said, “I expressed Cyprus’s continuous support to the application of India to join the Nuclear Suppliers Group (NSG)”.

President Anastasiades said they elaborated on further strengthening bilateral cooperation within the framework of the Commonwealth, taking also into account the linked issue of Brexit.

He highlighted the importance of India as a strategic partner of the European Union and the significance of deepening this relationship and said Cyprus is a firm supporter of the enhancement of the EU-India strategic partnership and within this context I expressed our sincere support for tangible progress in the negotiations for the conclusion of an EU-India Free Trade Agreement.

President Anastasiades briefed President Kovind on the latest developments regarding the Cyprus Problem, elaborating on the prospect of resuming the negotiating process. At the same time he reiterated his unwavering commitment to reaching a viable and functional settlement, in full respect to international law, the relevant UN Resolutions and the values and principles of the EU.

He expressed gratitude and appreciation “for the principled stance and important support they offer to Cyprus in our efforts to reach a comprehensive settlement which will reunite Cyprus in a modern and truly independent state, free from any foreign dependencies”.

In his remarks, Kovind noted that India and Cyprus “with shared historical experiences in our common aspirations” have supported each other in seeking independence from the colonial power (Britain) and in achieving progress and prosperity.

He paid tribute to the founding fathers of the two countries, Archbishop Makarios III and Mahadma Ghandi, noting they have blessed the two countries’ partnership and enjoyed longstanding and excellent relations, with India offering its “unwavering support for Cyprus for sovereignty and territorial integrity”.

President Kovind said  “we are aligned in our common objectives to negotiate the challenges that lie ahead and we commit ourselves to our mutually beneficial ties, especially in the economic field”, adding that India aspires to be “the fastest growing economy in the world” with a growth rate of 8.2% last quarter. In this context, this expertise in financial services and investment banking, he said, there is much scope to deepen investment partnership.

He welcomed the signing of a Memorandum of Understanding on financial intelligence to combat money laundering, as well as the MoU on cooperation in environmental issues to promote sustainable development.

He thanked Cyprus for its strong support to India’s bid for permanent membership of the UNSC. Furthermore, he referred to tourism from India, noting that Indian students come to study at local universities.