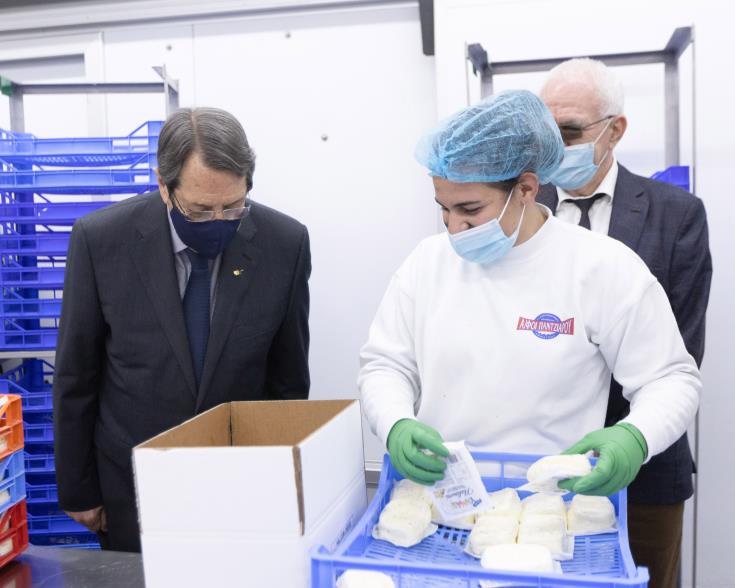 President of the Republic Nicos Anastasiades said on Tuesday that Monday was a historic day for Cyprus as the country achieved the registration of its traditional cheese, called `halloumi` as Protected Designation of Origin (PDO) and sent a message to the Turkish Cypriots, that if and when we function as a state we can have many benefits.

The President was speaking to journalists after a visit at the Pantziarou Dairies Halloumi Production Factory, in Athienou. He was accompanied by Minister of Agriculture Costas Kadis.

Invited to comment on the registration of halloumi as PDO by the EU, the President said that this will have a lot of benefits to both Greek Cypriots and Turkish Cypriots.

“Yesterday was a really historic day for Cyprus, especially for the economy, for animal husbandry, for cheese production, for the many years of efforts made by the Republic of Cyprus, in order to protect one of the most important contributors to GDP”, he stressed.

The President said that the exports of halloumi amount to 250 million euros and said that following this development they hope to multiply exports for the benefit of the primary sector of the economy, that will benefit not only the Greek Cypriots but also our Turkish Cypriot compatriots.

He noted that this is a strong message of how many advantages we can have if and when we function as a state and clarified that
“when I talk about state, I send a message to Turkish Cypriots about how many benefits we can have from similar protections offered by the European Union “.

By gavriella
Previous article
Where to get a rapid test on Wednesday, 31 March
Next article
Greek Cypriot and Turkish Cypriot parties discuss current Cyprus problem issues with UN Assistant SG