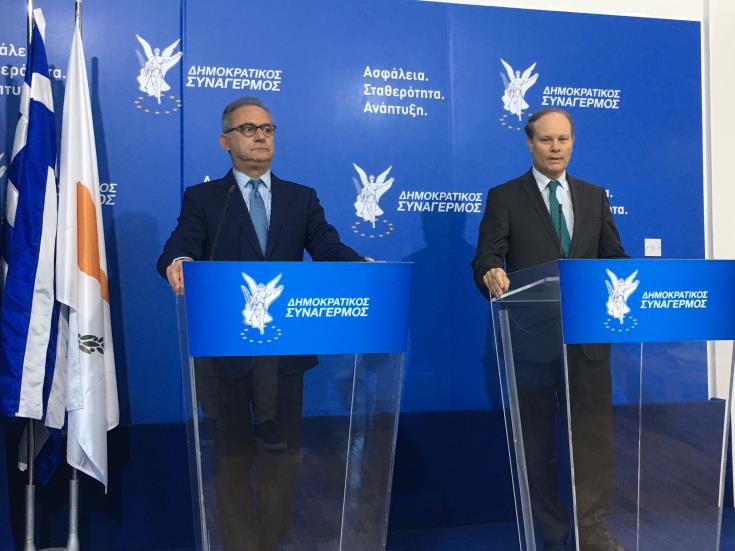 The Ambassador of France in Cyprus René Troccaz underlined on Friday Paris’ long-standing position for a Cyprus settlement, on the basis of a bizonal, bicommunal federation.

He was speaking after a meeting with Averof Neofytou, the President of the Democratic Rally, at the party’s headquarters. Besides the Cyprus issue, the two men also discussed energy issues and bilateral relations, as well as Neofytou’s forthcoming visit to Paris, between June 19-21.

“With regards to the Cyprus issue, I reiterated our long-standing position, France’s principled position in favour of a settlement on the basis of a bizonal bicommunal federation,” Troccaz said. The Ambassador also expressed his appreciation for the efforts on the part of Neofytou and his part to reach a settlement towards this direction.

Bilateral relations were also part of the discussion, which according to the French Ambassador, expanded on developments in the economic, defence, cultural and political realms.

The President of the Democratic Rally thanked the Ambassador for his support towards the efforts of the people of Cyprus to get rid of the Turkish occupation and reunite their country.

Apart from being the driving force for the EU, along with Germany, France is also a permanent member of the UN Security Council, an important country and a friend of the Republic of Cyprus, Neofytou underlined.

Strengthening relations between Cyprus and France is essential, said Neofytou and referred in particular to the energy sector. French energy giant Total has a stake in the exclusive economic zone of the Republic of Cyprus and exercised its right for drillings in the EEZ “and nobody dared to prevent” the company, he concluded.