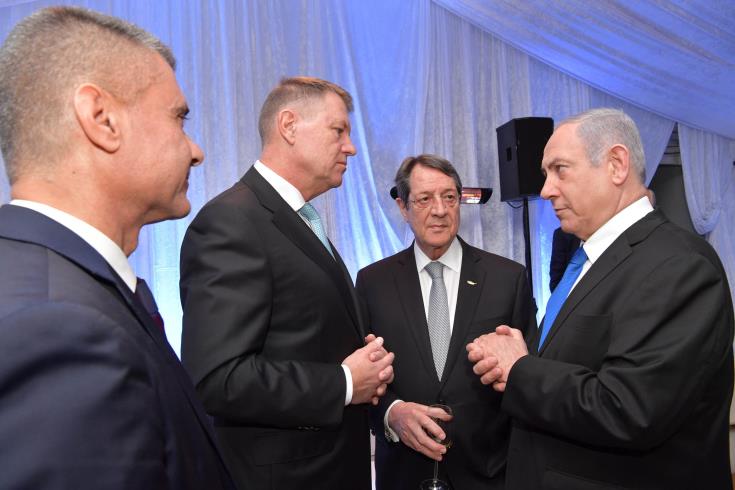 Heads of state and government conveyed to President Nicos Anastasiades support to the efforts of the government regarding a Cyprus settlement and Nicosia’s exercise of sovereign rights, on the sidelines of the 5th World Holocaust Forum taking place in Jerusalem.

The President of the Republic briefed his interlocutors on Turkey’s recent violations and the threats emanating from Ankara’s behaviour, not only for Cyprus but also for Europe and the Eastern Mediterranean, an announcement by the Presidency of the Republic says.

At the same time, the President also expressed his determination and readiness to engage in a dialogue on the Cyprus problem, without threats and illegal actions on the part of Turkey, it is added.

On his part, the President of France, in his meeting with President Anastasiades, expressed full support with regard to the sovereign rights of the Republic of Cyprus and the termination of Turkey`s illegal actions.

President Anastasiades also discussed with the Speaker of the US House of Representatives, Nancy Pelosi, who seemed fully informed about Turkey’s provocative actions in the EEZ of Cyprus, after initiatives of the authorities of Republic of Cyprus, of Cypriot and Greek Diaspora and friends of Cyprus in the US Congress.

Pelosi expressed her full support to President Anastasiades both with regard to the exercise of Cyprus’ sovereign rights in its EEZ and for reaching a solution to the Cyprus problem the soonest possible, on the basis of the UN resolutions, international law and with respect for human rights.

All the President’s interlocutors expressed their concern about Turkey`s behaviour toward Cyprus as well as their full support for the sovereign rights of the Republic of Cyprus and stressed the need for a solution to the Cyprus problem in line with international law, the announcement concludes.