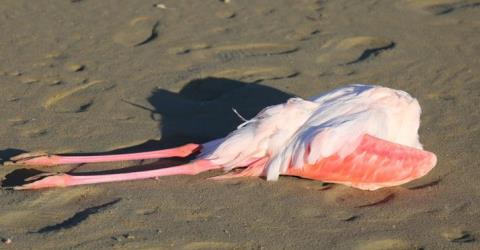 The Ministry of the Environment has announced that since the beginning of the year 77 flamingos were found dead at Larnaca salt lake, mainly as a result of lead poisoning.

Heavy rainfall and the large number of flamingos on the island (around 19,000), with 9,000 of them at Larnaca salt lake, have contributed to this year’s deaths, whereas in 2012 with very little rain and large numbers of flamingos, no deaths were registered. In 2003, 53 flamingos died, and this led to tests which established that they had died of lead poisoning.

According to officials, of the 77 birds found dead, 61% of them died of lead poisoning, 16% of other causes while tests continue to establish the cause of death for the remaining 23%.

Flamingos eat prawns found near the banks of the lake, something that puts them at risk of swallowing lead shotgun shells.

According to officials, various factors can cause the death of flamingos, including extreme weather conditions, stress, lead poisoning from swallowing lead shotgun shells, heavy rain which covers the old shooting range where flamingos feed and natural causes due to exhaustion from long migration journeys.