EYMED Joint Declaration: Proposals for a two-state solution are unacceptable 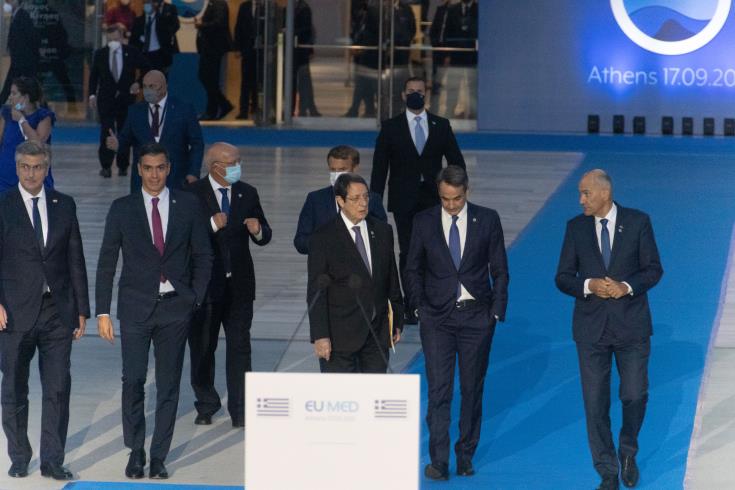 The EUMED 9 have issued a declaration reiterating their strong commitment to a bicommunal, bizonal federation solution in Cyprus, stressing that proposals for a two-state solution are unacceptable and call on Turkey to reverse illegal actions in the fenced-off area of Turkish occupied Famagusta, known as Varosha.

In a joint declaration, in the context of the 8th Summit of the Southern European countries, in Athens, Croatia, Cyprus, France, Greece, Italy, Malta, Portugal, Slovenia and Spain reiterate their “strong commitment to a viable comprehensive settlement of the Cyprus issue on the basis of a bicommunal, bizonal federation with political equality, as set out in the relevant UNSC Resolutions, which are binding on all, and in line with the EU acquis, values and principles.”

Therefore, they stress, “proposals for a two-state solution are unacceptable.”

“Efforts to resume negotiations should not be further undermined by illegal and provocative behaviour in the maritime zones and on the territory of Cyprus,” they point out.

The EUMED 9 “strongly condemn Turkish illegal actions in the fenced – off area of Varosha, which run contrary to Resolutions 550 (1984) and 789(1992) and call for their reversal in line with the UNSCE Presidential Statement of 23 July 20221 and the Declaration of the High Representative on behalf of the European Union of 27 July 2021.”

A peaceful, stable, secure and prosperous Mediterranean is a strategic priority for the EU. The Southern European countries, act as a pillar of stability in the region, by sharing a common approach with regard to the challenges and a joint vision about the future of the Mediterranean region and of Europe as a whole.

The Mediterranean, the EUMED 9 say, “faces a number of ongoing crises, affecting all countries and peoples of the region and beyond.”

They call “on all countries in the region to respect the sovereignty and sovereign rights that EU member states have over their maritime zones in accordance with international law including the law of the sea.

“We underline that the delimitation of the Continental Shelf and the Exclusive Economic zone should be addressed by peaceful means of dispute settlement and in accordance with the United Nations Convention on the Law of the Sea (UNCLOS).”

They reiterate their call “on Turkey to accept the invitation by Cyprus to engage in dialogue on the delimitation of the maritime zones between their relevant coasts, including by submitting the issue to the International Court of Justice.”

“In line with the relevant European Council Conclusions as well as the Statement of 25 March 2021, it is fundamental that all States unequivocally abide by international legality and abstain, in a consistent and permanent manner, from provocations or unilateral actions in breach of international law,” they note.

The EUMED 9 reaffirm their “determination, in case of such action, to use the instruments and options at the disposal of the European Union to defend its interests and those of its Member States as well as to uphold regional stability.”

They also reiterate their “readiness to engage with Turkey in a phased, proportionate and reversible manner to enhance cooperation in a number of areas of common interest, subject to the respect of conditionalities set out by the European Council last June.”

Among other issues, the EUMED 9 also address the Middle East Peace Process welcoming the recent resumption of high-level contacts between the governments of Israel and the Palestinian National Authority; the situation in Syria, expressing concern about signs of possible resurgence of violence and calling on a stepping up of efforts to relaunch the political process under UN auspices; the crisis in Lebanon, expressing their readiness to support the Lebanese government in implementing the measures expected by the people of the country and the international community; Libya, expressing their support to ongoing efforts to a Libyan -led and Libyan -owned resolution of the crisis and urging all stakeholders to further increase efforts to prevent illegal migration flows and human trafficking, smuggling and prevent arms embargo violation.

They also call on Afghan authorities to cooperate with international donors on humanitarian issues and in the fight against terrorism. On Afghanistan they stress that “special attention should be given to the respect of human rights and in particular the rights of the most vulnerable, including women and children, human rights defenders and persons belonging to minorities.

Referring to the European Agenda the EUMED 9 point out that they acknowledge the need to for the EU to take a significant step towards a greater European capacity to act in the field of security and defence. This ambition, they say, “which must be implemented quickly after the adoption of the Strategic Compass by March 2022, should infuse all levels of decision.”

On growth they note that “our efforts must continue to ensure the proper implementation of the growth -enhancing investments included in the Recovery and Resilience Plans and the swift disbursements of the funds to support the recovery.” They also express commitment to reducing inequalities and discrimination, especially between women and men, defending fair wages, fighting social exclusion and tackling poverty.”

On COVID-19 they focus on the cooperation between the EU, the need to overcome weakness in the states health systems and they point out, among other things, that “the time has come to reflect on the best way to relaunch international travel on a common basis.”

They also announce that the next Summit of Southern countries of the EU will take place in Spain.