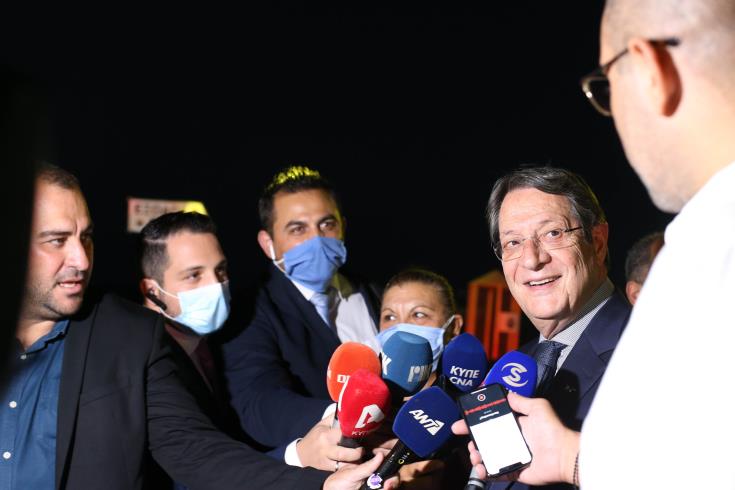 The President of Cyprus Nikos Anastasiades said that the European Council could convene in an extraordinary Summit to look into the situation if Turkey continues to behave the way it does.

In statements before an anti-occupation rally organised by Famagusta Municipality on Thursday evening in Deryneia, the President said that there is no doubt that Turkey continues to violate the UN Charter while their actions are not based on international law.

If the Turks believe that their actions are based on international law they should listen to EU calls as well as our suggestion and that of Greece to appeal to the International Court of Justice in The Hague or to seek international arbitration, the President said.

“I wonder what they have to worry about, if, as they claim, they act in accordance with international law” he added.

Our approach, and that of Greece, is nothing more than our effort to achieve compliance through diplomacy, he went on.

“You realise that we have to do with a country that, I repeat, shows no respect for international law rules and does not adjust to modern times” the President added.

Asked if Cyprus is satisfied with the stance of its European partners the President pointed to Friday’s extraordinary meeting of Foreign Ministers in order to examine the situation, adding that “an extraordinary Summit of the European Council could be convened to look into the situation, if Turkey continues to behave the way it does”.

According to the illegal NAVTEX the area is located southeast of Cape Greco in Famagusta and includes parts of blocks 2, 3 and 13 of Cyprus’ EEZ.

The Republic of Cyprus, immediately issued an anti-NAVTEX according to which the Turkish NAVTEX is illegal and violates the sovereign rights of the Republic of Cyprus and has taken steps on various levels in relation to the new Turkish provocations.

More recently, a Turkish research vessel started sailing within the boundaries of an area defined by a navigational telex Turkey issued illegally on August 10 announcing that “Oruc Reis” will conduct seismic surveys in the area south of the Greek islands of Karpathos, Rhodos, and Kastellorizo until August 23.

The area spans in parts of the Greek and Turkish continental shelves and Cyprus’ EEZ.

“Oruc Reis” is accompanied by two more ships, “Ataman”, and “Cengiz Han”, as well as the Turkish navy.