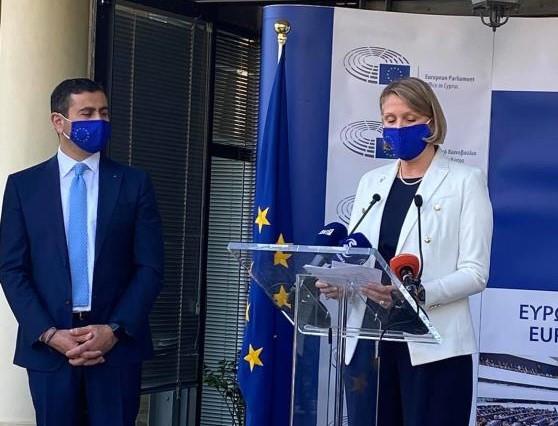 The European Citizen’s Prize 2020 was awarded during a national ceremony held in Nicosia on Saturday, to the founder of the Social Mediation in Action (ICLAIM) program, Professor Stephanie Shaelou.

The hybrid event was being transmitted live in the Facebook page of the European Parliament Office in Cyprus.

In his welcoming address, Andreas Kettis, Head of the European Parliament Office in Cyprus, noted that Cyprus has had the privilege of two winners this year considering that no more than 50 Prizes are given across EU member states each year.

Shaelou said that it is important that for the first time last year the nominations for the European Citizen’s Prize were open directly to all European citizens and added that when she applied on behalf of ICLAIM she did it as a citizen of Cyprus and the EU who wanted to share with other citizens of the European Union and their representatives, the fantastic work ongoing at grass root level from a tiny corner of the EU, that being Pyla in Cyprus.

She further outlined the human journey behind the award because, she noted, ICLAIM is made by men and mostly by women, from many different origins and backgrounds, citizens of the world, who strive for a better future on the island of Cyprus and beyond.

Shaelou pointed out that ICLAIM is a very young social enterprise, born out of a walk she had one day in her neighborhood wondering what we could do to make a difference, “we, academics, researchers, and students in communion with the wider society”.

The journey, she said, started at the university UCLan in Pyla, Cyprus, by the establishment of an independent non-profit organization with the help and expertise of her colleagues at the School of Law including Lida Pitsillidou, Nevi Agapiou and Nataliee Alkiviadou and others. Then came the practicing lawyers to assist with the legal entity, the design people for visibility, the researchers and students on internships to give it bone and flesh, she said, thanking some of them who were present at the ceremony today.

Shaeelou said that ICLAIM set a mission to itself and that was to foster social dialogue and the rule of law through education and training and enhance active citizenship through knowledge transfer activities to group of interested parties and the wider public. Expertise included Law, Dispute Resolution, Human Rights, Peacebuilding but also Social Work and Psychology, she added.

She explained that they all work on a voluntary basis for a good cause, to serve the wider society and facilitate social integration on the ground. “So, our projects could be only socially oriented and inclusive of many different groups. Getting inspiration of Spain and France and benefiting from an introduction to social mediation from a Spanish college, a team of experts and students at UCLAIM undertook the writing of a handbook on social mediation from professionals in Cyprus, in a European context. The social mediation in practice project was born”.

Its broader objective is to spread social mediation as a tool for the resolution of conflicts in Cyprus society, across the divide, and beyond the island of Cyprus, she added. Since July 2018 handbook and ICLAIM expertise have been disseminated in a series of training workshops promoting the use of social mediation among individuals primarily from the education, the NGO and the law enforcement sectors, across communities.

She added that this was followed by an intercommunal workshop series entitled “Social mediation in practice” delivered in 2019 and 2020. The workshops led to the establishment of the Social Mediators Network in September 2020, she said. Amid the pandemic the project swiftly reacted to the situation on the impact of Covid 19 on communities in Cyprus and on the role that social mediation could play in this setting.

Shaelou said that this prize recognize the active citizenship of almost 100 people across the island and beyond.

MEP Niyazi Kizilyurek highlights the importance of the project
————————-
Today we honor the ICLAIM which concerns a cross border project that was founded in 2018 by professor Stephanie Laulhe Shaelou and became intercommunal in 2019 – 2020, MEP Niyazi Kiziliyirek said in his speech as a member of the national jury for the award.

“Now that the contacts between the two communities have become so difficult due to political and other reasons, projects that support and strengthen the bicommunal cooperation and interaction are more vital than ever. The project’s aim is to empower the two communities in Cyprus to find constructive solutions to live together and build a common future in Cyprus and the EU,” he said.

The EU paradigm of peace must become our beacon if both communities of this island wish to thrive and look towards the future with optimism and hope, he said. “For the generations of Cyprus to come,” he added.

Kiziliyurek stressed that the European Citizen’s Prize Chancellery (MEP’s from countries other than Cyprus) supports that the bicommunal activities must be supported and highlighted. This is the political message of the EU, he added, “which at this political juncture is vital to loudly hear”.

The EU focuses its policies on the European Citizen and the approximately 450 million European Citizens are encouraged by the EU Institutions to be active citizens, substantially contributing to the shaping and fulfilment of EU policies and programs, he added. “European active citizens make this possible not only through their participation in national and European elections but also through everyday life achievements for the benefit of the many and not the few”.

“Active European citizens are therefore a sine qua non condition for the smooth functioning of the EU. Undoubtedly, the European Citizen’s Prize established by the European Parliament comes precisely to credit and highlight this very important parameter,” he said.

Kettis also said that the European Citizen’s Prize was established in 2008 by the European Parliament as a reward for the outstanding achievements of citizens, groups, associations or organizations whose actions have shown an exceptional commitment to promoting better mutual understanding and closer integration between citizens of states, member States or to facilitate cross-border or transnational cooperation within the EU. Activities or actions of citizens involved in long-term, cross-border or transnational cultural cooperation that help to strengthen a European spirit may also be included.

Furthermore, he said that this year`s winners from Cyprus will travel later in the Autumn to Brussels provided of course that the epidemiological conditions allow so in order to participate in the European Parliament at the main honoring event, together with all the winners from the other member states of the Union.