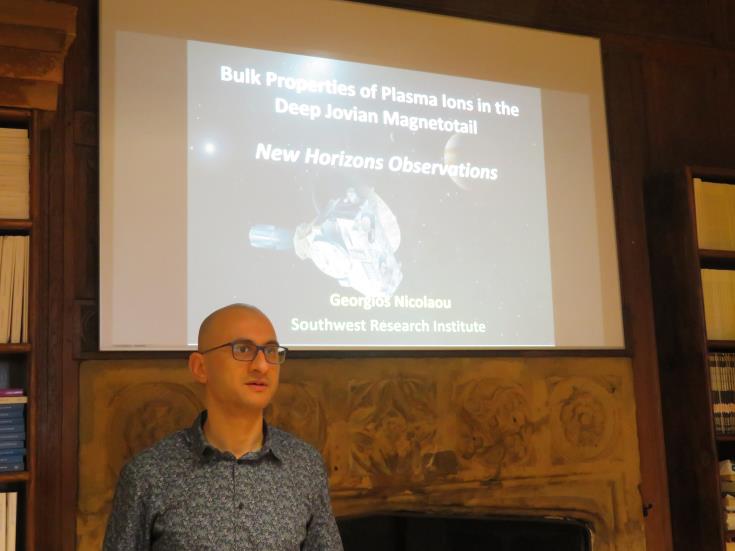 The study of space is the future, the Cypriot scientist, who shed  light on the secrets of Jupiter, the largest planet of our solar system, has told CNA.

Dr Georgios Nicolaou, who has analyzed the data of the NASA New Horizons mission, is a scientific member of the Cyprus Space Exploration Organization (CSEO) and has been working abroad for years on missions exploring our Solar System.

The Cypriot scientist spoke to CNA about his role in the New Horizons mission, which on New Year`s Day passed by the most distant celestial body that was ever studied by a spacecraft, the so-called Ultima Thule.

The New Horizons spacecraft, which in 2015 studied Pluto and some days ago passed by Ultima Thule, at the beginning of its journey in 2007, flew by Jupiter, to exploit its gravity and accelerate for its journey to Pluto and beyond.

During its passage from Jupiter, Dr Nicolaou worked on the calibration of the instrument measuring the ion fluxes and he analyzed the measurements taken by that instrument when the spacecraft passed through the magnetic system of Jupiter.

In order to have the correct interpretation of the data, it was necessary to simulate and model the instrument`s response to the planet`s environment.

He told CNA that ultimately, they were able to see the ion fluxes in the deep magnetotail of the planet and understand the various mechanisms that govern the physics of the system.

This study is published in a series of articles in international scientific journals.

Asked about space exploration, Dr Nicolaou said that it is clear that the study of space is the future.

He pointed out that the study of space is necessary to understand the mechanisms that take place in our planet`s system and thus to be able to protect it.

He referred to the study of space weather and space physics, which explores how the sun`s activity affects earth`s magnetosphere, sometimes with devastating consequences on communication systems, electrification, etc.

Asked how he would describe Cyprus` steps in the study of space, he underlined the “outstanding contributions” of other Cypriot scientists to space missions and studies and said that the Cyprus Space Exploration Organisation has achieved significant steps in this field and has important partnerships around the world.

“I`m really proud to see my country flourishing in such an important field with so many prospects,” he said.

He told CNA that as a scientific member of the CSEO he works with the organisation on various  international programs and referred to the forthcoming collaboration with the Organization on a mission to explore the solar system.

Concluding, he expressed hope that Cyprus, “which has excellent scientists at home and abroad”, will have the financial capacity and the appropriate infrastructure to lead space missions and studies in the near future.

Dr Nicolaou was born in Cyprus in 1985. After completing his undergraduate and postgraduate studies in the Physics Department of the University of Athens he continued in the US where he did his doctoral thesis and worked at the Southwest Research Institute on the New Horizons mission data.

He has a post-doctorate degree from the Swedish Institute of Space Physics (IRF), where he worked on the design and simulation of plasma instruments and on the data analysis of the Rosetta mission on Comet 67P / Churyumov-Gerasimenko.

He is currently working as a postdoctoral researcher at the University College London`s Mullard Space Science Laboratory, on the Solar Orbiter mission.

By In Cyprus
Previous articleHarmonized Inflation up by 0.8% in 2018
Next articleCyprus banks: Nine-month results pave way for optimism