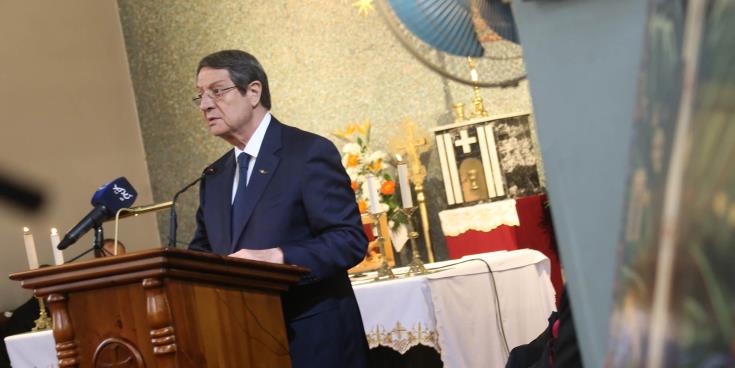 Cyprus’ is pursuing its energy strategy as planned, the President of the Republic Nicos Anastasiades has said. He also pointed out that goodwill dictates proceeding to a dialogue for a Cyprus solution, without any preconditions.

Speaking to the press on Sunday following a mass to celebrate the Feast Day of St Maron in Nicosia, the President said that just because Turkey does not recognize the Cyprus Republic we are not going to give up our state sovereignty so that the talks can resume.

Invited to comment statements made by Turkish officials that there should be a moratorium on Cyprus’ energy programme for the dialogue to resume, the President pointed out that goodwill dictates that we attend the dialogue.

He underlined that Turkey puts into questions Cyprus’ sovereign rights and violates the international law and these do not constitute good will.

The President added that there needs to be good will and determination for a solution which will also lead to benefits in the energy sector.

Replying to a question about possible developments in the resumption of talks after the so called elections in the Turkish Cypriot community, the President said that we need wait for the election process to finish but we also need to take into consideration Turkey`s stance.

He added that the UN Secretary General proposed an informal five party conference at the end of the year but this was rejected by Ankara. He went on to say that good preparation for a fresh conference is needed, adding that Turkey needs to proceed without any prerequisites. He also said that the outcome of such a conference will determine the agreement on the terms of reference and the way forward.

Addressing the congregation at the Church of Saint Maronas, the President also reaffirmed that the reunification of Cyprus on the basis of a viable, functional and mutually acceptable solution remains his primary concern. He pointed out that the solution must terminate the occupation and the guarantees.

He also went on to say that the solution must safeguard the rights of all the citizens on the island and will promote peace, security, stability and progress. The President referred to the tripartite meeting the UN SG called last November in Berlin and called on Turkey to show goodwill and determination and to end its violations and illegal actions in Cyprus’ exclusive economic zone.

By In Cyprus
Previous article
Frankfurt airport cancels about 100 flights due to storm Sabine
Next article
Fourth case of coronavirus found in Britain; linked to cases in France