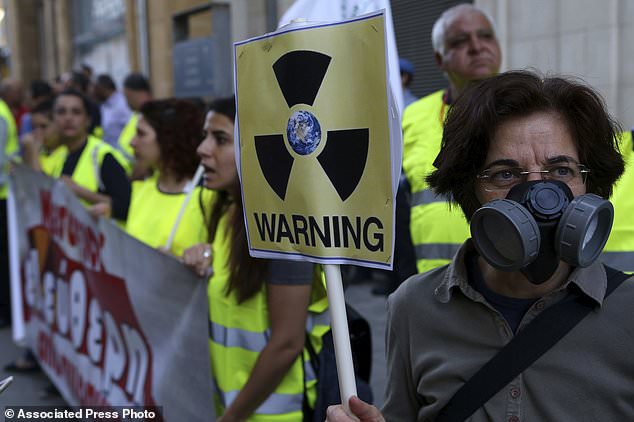 Protesters on Thursday urged ethnically-split Cyprus’ government and breakaway Turkish Cypriot authorities to step up their protests against a nuclear power plant Russia is building on Turkey’s Mediterranean coastline.

Around 250 Greek Cypriot and Turkish Cypriot protesters on Thursday linked arms across a 250-foot (75-meter) stretch of U.N. controlled buffer zone splitting the capital Nicosia to protest against the plant they say could pose a grave threat to Cyprus and the region because it’ll be built in a seismic region.

Protesters banged a drum emblazoned with the radiation hazard symbol and held a banner reading “No to nuclear power” in Greek, Turkish and English. Left-wing parties and environmental groups from both sides of the divide staged the protest on the 32nd anniversary of the Chernobyl nuclear disaster.

It also came three weeks after Turkish President Recep Tayyip Erdogan and Russian counterpart Vladimir Putin launched the start of construction of the $20 billion plant at Akkuyu, around 60 miles (96 kilometers) from Cyprus’ northern shoreline. It’s expected to be completed by 2023. Greek Cypriot Charalambos Theopemptou, a Greens Party lawmaker, said the Cyprus government should get the European Union to take up the issue with Turkey which aims to join the bloc.

Greens Party leader George Perdikis said his party petitioned Cypriot President Nicos Anastasiades to pursue drafting a joint declaration against the plant with Turkish Cypriot leader Mustafa Akinci, but without result. Turkish Cypriot school teachers’ union boss Sener Elcil said many Turkish Cypriots know the risks and oppose the plant, but their leaders must end their silence and take a stand in order to marshal public support. The Cyprus government said earlier this month that it would lodge protests against the plant’s construction.

By In Cyprus
Previous article
Anastasiades: The status quo is not, under any circumstances, the solution in Cyprus
Next article
Waiting for the 33-year old suspect to speak