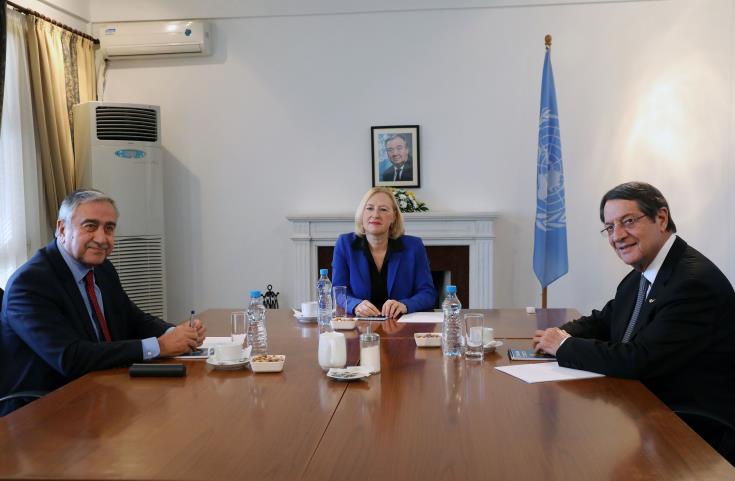 President Anastasiades, and Turkish Cypriot leader, Mustafa Akinci, will hold at 10:30 in the morning an informal meeting at the residence of the UN Secretary General`s Special Representative in Cyprus, Elizabeth Spehar, in the UN-controlled Nicosia buffer zone.

At the same time, the UN Secretary General`s Special Envoy on Cyprus, Jane Holl Lute, will meet in Athens with Greek Minister of Foreign Affairs, Giorgos Katrougalos, in the framework of her meetings with the parties involved .to formulate the terms of reference that will pave the way for the resumption of the Cyprus talks.

Government Spokesman, Prodromos Prodomou, has told CNA that there is no agenda for the meeting between Anastasiades and Akinci and that the two leaders will not engage in formal negotiations. He noted that President Anastasiades is attending the meeting with a view to conclude the terms of reference.

He also said that in order to have progress, all six parameters of the framework outlined by the UN Secretary-General Antonio Guterres need to be accepted.

Moreover, he stressed that If there is political will, especially on the part of Turkey, the process to resume settlement talks will also go forward.

Spehar has had telephone conversations with both leaders in the framework of preparations for their meeting. UN spokesperson in Cyprus, Aleem Siddique, told CNA that Spehar looks forward to hosting the two leaders.

By In Cyprus
Previous articleChildren’s Carnival Parade
Next articleState borrows €82,4 million at a negative yield