3rd batch of medical supplies donated by China next week 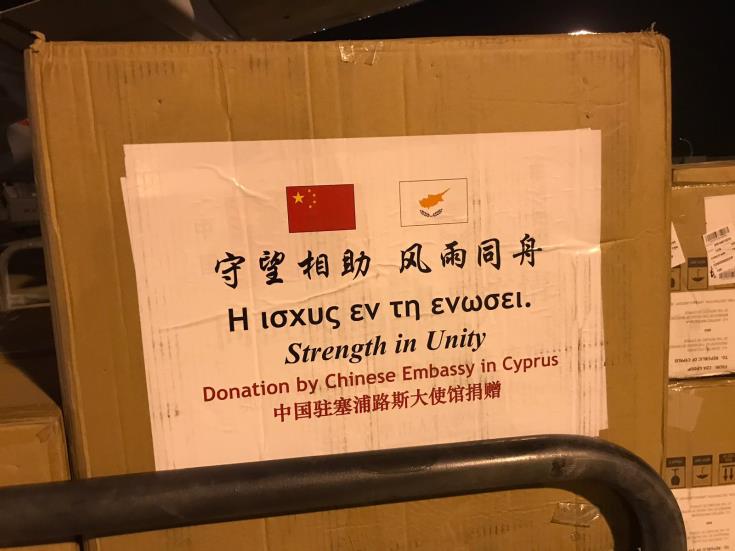 The third batch of medical supplies donated by China to help Cyprus address the coronavirus outbreak is due by chartered flight next week, the Chinese embassy in Nicosia said.

On Monday,  Ambassador Huang Xingyuan and Foreign Minister Nicos Christodoulides will attend the handover ceremony of China’s donation to Cyprus at the Ministry of Foreign Affairs in Nicosia, it added.

The second batch of China’s donation of medical supplies arrived at Larnaca via a Cypriot chartered flight along with other procured goods of Cyprus  early on April 11. It included 20,600 FFP2 masks, 110,000 disposable medical masks, 30,000 non-medical masks and 500 non-medical protective coveralls donated by the Embassy of China in Cyprus, Chinese companies and sister cities.

“Next week, the third batch of China’s donation, including 5,000 protective coveralls, 417 sets of test kits (for 10,008 persons) and 10,000 N95 masks which belong to the official aid from the Chinese government to the government of Cyprus, along with 50,000 disposable medical masks donated by sister city will be transported to Cyprus onboard anther Cypriot charter flight,” the embassy added.

On April 2, China handed over the first batch of medical supplies to Cyprus, including 1,320 protective coveralls, 5,000 KN95 masks, and 5000 disposable medical masks donated by the Embassy of China in Cyprus and Chinese companies.

“In the past two weeks, the Embassy of China in Cyprus has made or is making free provisions of over 14,000 disposable medical and non-medical masks to the municipality of Paphos, local hospitals, schools and government departments to help alleviate the shortage in medical supplies,” it added.

And it said that it has been working in partnership with the Ministry of Foreign Affairs and the Ministry of Health of Cyprus as part of the joint prevention and control efforts.

“After the first confirmed case on the island, the Embassy of China in Cyprus actively coordinated with competent authorities of Cyprus while facilitating joint efforts of China’s Ministry of Foreign Affairs, Ministry of Commerce, China International Development Cooperation Agency, China Customs and manufacturers in fast tracking the production, customs declaration and transportation of the medical supplies destined for Cyprus amid global competition for materials and unprecedented logistical challenges to ensure their timely arrival,” it said.

Chinese local governments such as the City of Jinhua of Zhejiang Province, Chinese companies such as Huawei, and cities of Nanjing and Guangzhou, sister cities to Limassol and Ayia Napa, have all done their part by lending a helping hand in different ways.

China is ready to reciprocate the kindness shown by Cyprus when it was in midst of the epidemic and continue to provide support “as a true friend and trustworthy partner,” the embassy said.

By In Cyprus
Previous articleBan on crossings to UN, diplomatic missions for a week, says Ozersay
Next articleWorldwide coronavirus cases at 1.7 million, death toll crosses 108,000