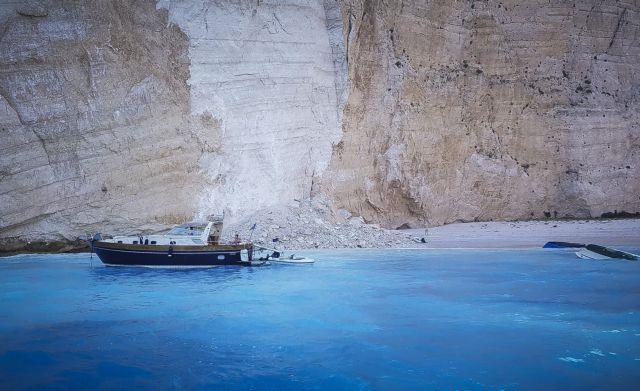 The landslide at Navagio (Greek for shipwreck) happened at a time when hundreds of people were at the beach.

The Hellenic Coast Guard decided to close off the area, until further notice.

Scientists and locals said that a landslide was something they long feared would happen.

Athanasios Ganas of Athens’ Institute of Geodynamics told NEA that scientists had repeatedly expressed their concern over possible landslides in the area.

“The rocks along the coastline from Zante to Cephalonia, until Lefkada are not compact because they are overwhelmed by the many, powerful seismic vibrations that occured in the past several years. Even at points where the rocks look stable, individual parts are crushed,” he said.

President of Greece’s Organization of Earthquake Planning and Protection, Efthimios Lekkas, said that his organization suggested the zonification of the dangerous areas and the use of protective wire fences that will prohibit the public from approaching them, to “minimize consequences and avoid the loss of life.”

Zante’s Mayor, Pavlos Kolokotsas, proposed to prohibit swimming in the affected beach and make it accessible solely as a tourist attraction.