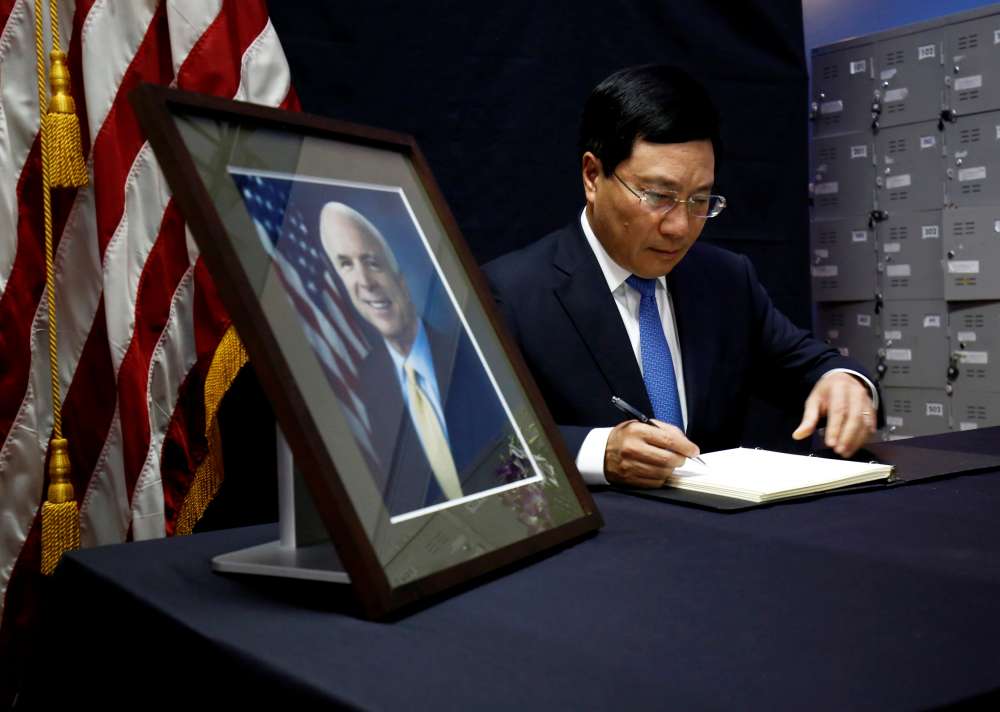 U.S. Senator John McCain was a “symbol of his generation” who helped “heal the wounds of war” by pushing for diplomatic normalisation of ties with Vietnam, the Southeast Asian country’s foreign minister said on Monday.

McCain, a former prisoner of war in Vietnam who ran for president in 2008 as a self-styled maverick Republican and became a prominent critic of President Donald Trump, died on Saturday. He was 81.

“For both the government of Vietnam and its people, Senator McCain was a symbol of his generation of senators, and of the veterans of the Vietnam war,” Vietnam’s foreign minister Pham Binh Minh wrote in a condolence book at the U.S. Embassy in Hanoi on Monday.

“It was he who took the lead in significantly healing the wounds of war, and normalising and promoting the comprehensive Vietnam-U.S. partnership,” Minh said.

McCain had been one of the most vocal proponents in Washington in favour of normalising times with Communist-led Vietnam, a former enemy of the United States.

His public relationship with the Southeast Asian country began as a naval aviator during the Vietnam War, when his plane was shot down during a bombing mission over Hanoi in 1967.

He suffered two broken arms, a broken leg, and was stabbed and beaten after being dragged from a lake on the edge of the downtown area of the city. He spent years as a prisoner of war at Hoa Lo prison – or the “Hanoi Hilton”, as it was known to American soldiers.

A monument on the shores of the Hanoi lake where McCain was captured has turned into a de facto shrine to the late senator since news of his death reached Vietnam early on Sunday morning.

Both Vietnamese people and U.S. citizens in Hanoi have flocked to the grey, concrete monument to offer flowers, incense, flags and other tributes to McCain.

“Condolences to senator and war veteran John McCain, who greatly contributed to the normalisation of Vietnam-U.S. relations,” said one message in Vietnamese, left at the sculpture attached to a bouquet of flowers on Monday.