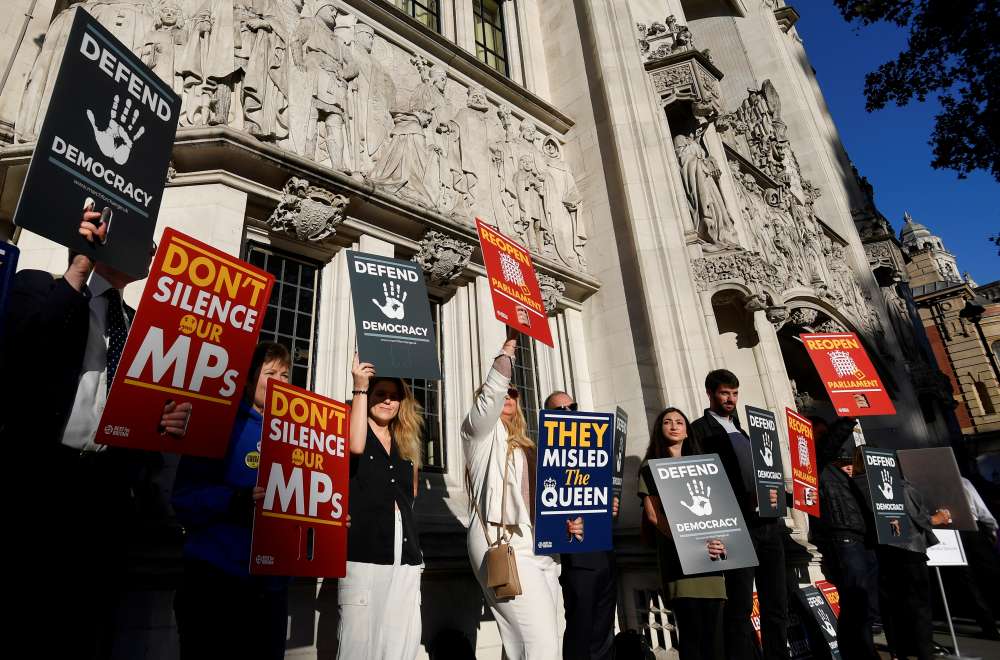 Britain’s top court will rule on Tuesday whether Prime Minister Boris Johnson’s decision to suspend parliament was unlawful, a judgment that could lead to the recall of the legislature and give lawmakers more chance to obstruct his Brexit plans.

Johnson advised Queen Elizabeth to prorogue, or suspend, parliament on Aug. 28, a move his opponents said was made to stymie challenges to his promise to take Britain out of the European Union on Oct. 31 with or without a divorce deal.

Johnson says the aim of the suspension – from Sept. 10 until Oct. 14 – was to allow his Conservative government bring in a new legislative agenda and that few working days would be lost.

During three days of hearings last week, the Supreme Court was told by lawyers for anti-Brexit campaigners, opposition lawmakers and even former Conservative prime minister John Major that the five-week shutdown was the longest in 50 years and simply a means to stop parliament doing its job.

Under Britain’s uncodified constitution, the power to suspend or dissolve parliament formally remains with the monarch, a politically impartial figure who acts in accordance with the advice of the prime minister.

The Supreme Court will have to decide if the issue is one that judges should even be involved in or if it was simply a political issue.

The High Court of England and Wales ruled earlier this month that the issue was indeed not “justiciable” but Scotland’s top court concluded Johnson had acted illegally and that the prorogation should be declared null and void.

“As we have heard, it is not a simple question and we will now consider carefully all the arguments that have been presented to us,” Brenda Hale, the court’s president, said at the end of the hearings on Thursday.

If the top court agrees the suspension was illegal, it could say that Johnson should recall parliament or that as the prorogation was unlawful, the legislature could simply be reconvened by its speakers.

In a legal document submitted to the court last week outlying what Johnson might do if the ruling went against him, his lawyers suggested that he could prorogue parliament again.

“I have the greatest respect for the judiciary in this country, and I think the best thing I can say at the moment whilst their deliberations are continuing is that…I will wait to see what transpires,” Johnson told reporters on Friday.

Foreign Secretary Dominic Raab said on Sunday the government would respect the decision but asked whether a second suspension was possible, he said: “Let’s wait and see what the first judgement decides and then we’ll understand the lie of the land.”

Before the suspension, Johnson suffered repeated defeats in the House of Commons, where he now has no majority, and an early recall of lawmakers could see them attempt to question, amend, or even block his Brexit plans.

Most lawmakers are opposed to a so-called “no-deal Brexit” scenario, predicting that it would cause economic damage and severe disruption, including to food and medicine supply chains.

A cross-party rebel alliance managed to force through a law aimed at stopping Britain leaving the EU without an agreement by requiring Johnson to ask for a three-month extension if he has not been able to strike a deal by Oct. 19.

Johnson and other government ministers have maintained that Britain will leave on Oct. 31 and will not countenance any further delays, indicating that they might seek to ignore the legislation and possibly bring about further court battles.