Ukraine president on course for unprecedented majority after election win 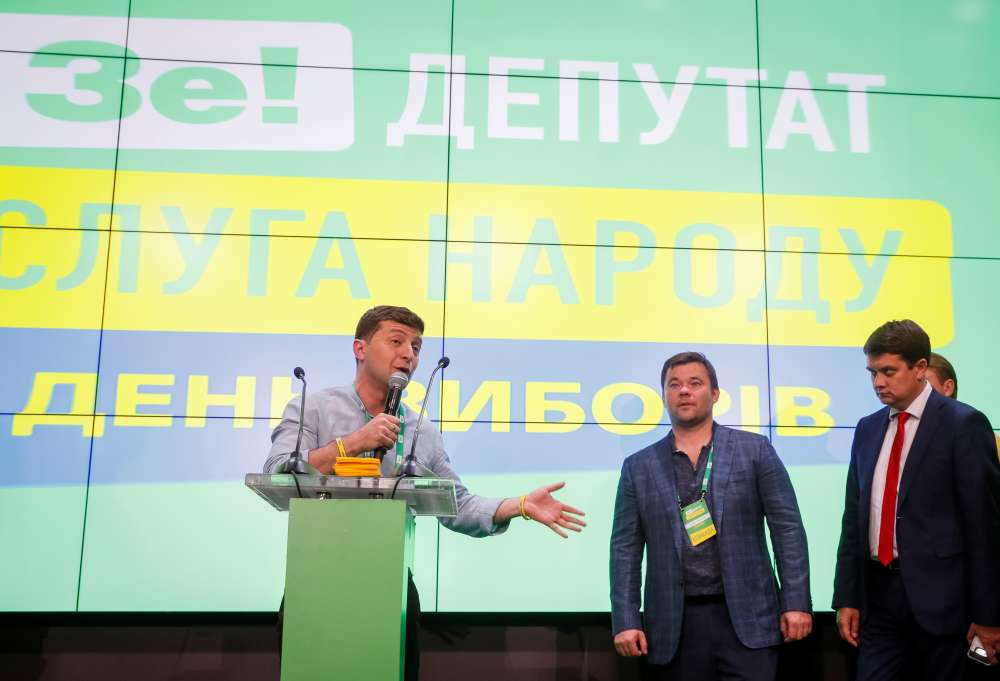 President Volodymyr Zelenskiy looked set on Monday to become Ukraine’s first leader since the fall of communism to command a single party majority in parliament, in what would be an unprecedented mandate to deliver promised reforms.

His party’s victory in Sunday’s snap parliamentary election caps a meteoric rise for the former TV comedian who has tapped into widespread anger over entrenched corruption and low living standards in one of Europe’s poorest countries.

Zelenskiy’s Servant of the People party, named after the satirical TV series where he played a humble history teacher who accidentally becomes president, was on course to win 246-249 seats out of 424 seats, his party estimated.

That would give Zelenskiy, 41, the power to decide the make-up of the next government and control over a parliament that had previously been loyal to his predecessor Petro Poroshenko and blocked his legislative agenda.

Since defeating Poroshenko by a landslide in April’s presidential race, Zelenskiy has promised to keep Ukraine on a pro-Western course and seek a new aid-for-reforms programme with the International Monetary Fund.

He has also pledged to find a lasting peace in eastern Ukraine’s Donbass region, where war between Kiev’s forces and Russian-backed armed separatists has killed 13,000 in five years since Moscow’s annexation of Ukraine’s Crimea peninsula in 2014.

His back-to-back election victories “create the necessary support for the newly elected president to implement much-needed and long-delayed reforms,” a note by Citi said.

Markets welcomed the prospect of a period of political stability, with some of Ukraine’s dollar-denominated sovereign bonds rising to their highest since early 2018.

“Zelenskiy’s party will have a majority in the parliament and it is very likely that it will be a vast majority. That’s a total surprise that they won so many in constituencies,” said Volodymyr Fesenko, an analyst at the Penta think-tank.

It would be the first time since Ukraine won independence from the Soviet Union in 1991 that most members of parliament belong to one political party.

Power is shared in Ukraine between the president and parliament.

The president nominates key appointments including the head of the central bank, the foreign and defence ministers and the head of the armed forces, while the biggest party or coalition in parliament determines the make-up of the government.

In Ukraine’s fractious politics, where parliamentary disputes have sometimes ended in mass brawls, hostilities between the government and president have stymied policymaking in the past.

Zelenskiy will now have to manage the high expectations that his large mandate has generated.

A pre-election survey by the Washington-based National Democratic Institute said 45% of voters expected Zelenskiy to negotiate a peace in the Donbass within 12 months — the biggest single priority among voters.

More than half of respondents also expected Ukraine to be a member of the European Union by 2030.

“There should be changes in our country. I am 49 years old and judging from my experience, I know we had no other way but to make such a choice. Otherwise, we would not be able to get rid of the past,” said Olena Moskalenko, a finance specialist from Kiev.

“I have one hope only – that we won’t get disappointed in our choice again and in our expectations,” she told Reuters TV.

Parliament nominally has 450 seats but in this election the number of constituencies fell to 199 from 225, reflecting the loss of control over Crimea and parts of the Donbass region.

A senior official in Zelenskiy’s party, Oleksandr Kornienko, said Servant of the People led in around 125-127 of the 199 constituencies. It was also set for a majority on party lists.

The Russian-friendly Opposition Platform was in a distant second place, followed by Poroshenko’s party and that of a former prime minister, Yulia Tymoshenko.

Another new pro-Western party, Voice, fronted by rock star Sviatoslav Vakarchuk, also passed the 5% threshold to enter parliament. Voice is the only party to which Zelenskiy has offered coalition talks.

By In Cyprus
Previous articleSpokesman: Anastasiades, Akinci to meet on August 9
Next articleUCY Research Centre projects GDP growth of 3.4% in 2019 and 2020