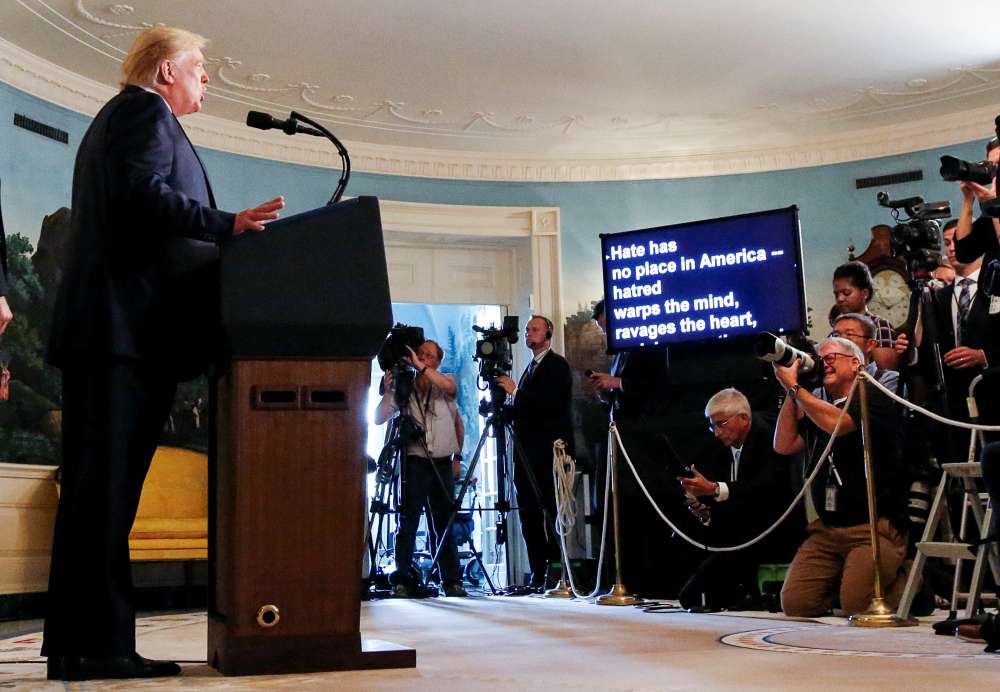 President Donald Trump on Monday proposed tighter monitoring of the internet, mental health reform and wider use of the death penalty in response to two mass shootings over the weekend that left 32 people dead in Texas and Ohio.

Trump, a Republican, whom Democrats have accused of stoking racial divisions, said Americans must “condemn racism, bigotry and white supremacy,” a day after Texas officials said racial hatred was a possible motive in the killings of 22 people in the southern border city of El Paso.

A 21-year-old white man has been charged with capital murder in Saturday’s shooting spree at a Walmart store. Police in El Paso cited a racist, anti-immigrant manifesto posted online shortly before the shooting, which they attributed to the suspect, Patrick Crusius.

Trump did not address accusations that his own anti-immigrant and racially charged comments have contributed to a rise in race tensions, nor did he call for broad gun control measures.

“These sinister ideologies must be defeated,” he said in remarks at the White House. “Hate has no place in America. Hatred warps the mind, ravages the heart and devours the soul.”

Democrats, who have long pushed for stricter gun control, quickly accused Trump of hiding behind talk of mental health reform and the role of social media instead of committing to laws aimed at curbing gun violence in the United States.

‘WE NEED TO HEAL’

“This president, who helped create the hatred that made Saturday’s tragedy possible, should not come to El Paso,” O’Rourke tweeted on Monday. “We do not need more division. We need to heal. He has no place here.”

Several other Democrats vying to face Trump in the November 2020 presidential election likewise blamed him for the attack in Texas, citing his rhetoric on immigrants.

Five of the Democrats were in San Diego on Monday for the annual conference of UnidosUS, the biggest Hispanic advocacy group in the United States. The group’s president, Janet Murguia, called Trump the “radicalizer-in-chief.”

Current Democratic frontrunner Joe Biden, who was vice president under former President Barack Obama, directed his opening remarks at the gun attacks. “Mr President, it’s long past time you called it out: It’s hatred pure and simple fueled by rhetoric that’s so divisive it’s causing people to die,” Biden said. Obama himself, who fought unsuccessfully for gun restrictions while in office, did not mention Trump by name when he urged Americans to reject divisive rhetoric.

“We should soundly reject language coming out of the mouths of any of our leaders that feeds a climate of fear and hatred or normalizes racist sentiments,” Obama said in a statement.

Trump began his presidential campaign in 2015 by characterizing Mexican immigrants as rapists and drug smugglers, and he has repeatedly likened illegal border-crossings from Mexico as an “invasion,” calling such migrants “very bad thugs and gang members.”

Eight Mexican citizens were among the 22 people killed at the El Paso Walmart on Saturday by a man who authorities say drove from his home in the Dallas suburb of Allen, 660 miles (1,062 km) away, to El Paso, authorities said.

Just 13 hours later, another gunman killed nine people in downtown Dayton, Ohio, before he was shot to death by police. His motive was not clear.

White House adviser Kellyanne Conway, speaking on Fox News, confirmed that Trump would travel to both El Paso and Dayton but did not give a date for either trip.

Mass shootings by lone attackers in recent years have heightened concerns about gun violence and the threat posed by racist and white-supremacist ideologies.

Trump, who has been accused of failing to aggressively tackle domestic extremist groups, said he would direct the U.S. Justice Department to investigate domestic terrorism and would propose legislation to ensure that those who commit hate crimes and mass murder face the death penalty.

“We must make sure those judged to pose a grave risk to public safety do not have access to firearms and that if they do those firearms can be taken through rapid due process,” he said, an apparent reference to “red flag” laws.

U.S. Senator Lindsey Graham, a Republican and Trump ally, said he has spoken with Trump about legislation he plans to introduce in September with Democratic Senator Richard Blumenthal. It would direct federal grant money to states seeking to adopt such laws.

“Red flag” bills make it easier for police to confiscate weapons from someone found to pose a threat of violent behavior.

In a Twitter post earlier on Monday, Trump called for “strong background checks” on gun buyers, but he did not elaborate on the idea and it was not the central part of his White House statement.

“Mental illness and hatred pulls the trigger, not the gun,” he said in the address.

After a gunman killed 58 people at a music festival in Las Vegas in 2017, Trump proposed a ban on attachments called bump stocks that give semi-automatic weapons the capability of a machine gun. The ban went into effect in March.

But Trump stepped back from sweeping gun law changes.

In a morning Twitter post, Trump called for bipartisan measures to strengthen background checks, possibly in combination with “desperately needed immigration reform.” But Democrats, who have fought Trump’s immigration crackdown, rejected such a linkage.

Lawmakers are not scheduled to return to Capitol Hill from summer recess until September.

The Democratic-led U.S. House of Representatives already has passed a bill calling for universal background checks for gun buyers.

Top Democrats have urged Republican Senate majority leader Mitch McConnell to reconvene the Senate to vote on the bill. Instead, McConnell encouraged bipartisan efforts to address mass murders in a statement that lacked the word “gun” but condemned “partisan theatrics and campaign-trail rhetoric.”