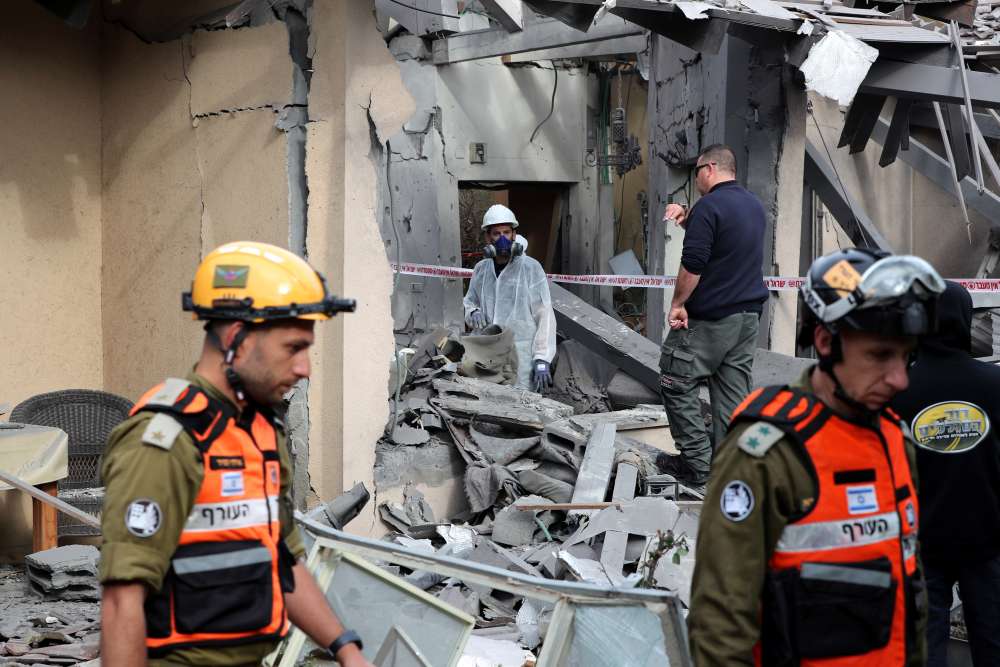 A long-range rocket launched from the Gaza Strip struck a house in central Israel on Monday, wounding six people in the first such incident since a 2014 war in the Palestinian enclave, Israeli authorities said.

The early morning attack on Mishmeret, an agricultural town north of Tel Aviv, came at a time of high tension ahead of the anniversary of Gaza border protests at the weekend, and with Prime Minister Benjamin Netanyahu visiting Washington as he campaigns for a fifth term in an April 9 ballot.

Israel’s commercial capital and outlying communities had last come under such an attack during the 2014 war with Gaza’s dominant Hamas Islamists.

The Magen David Adom ambulance service said it was treating six occupants of a home in Mishmeret, including an infant, for wounds. TV images showed a building with extensive damage, and police said it had also been set aflame.

The strike came minutes after the Israeli military activated air raid sirens in the area and said one rocket had been launched out of the Gaza Strip, a coastal territory 50 miles (80 km) away where Hamas and other factions possess such weapons.

Emmanuel Nahshon, spokesman for Israel’s Foreign Ministry, said the home in Mishmeret was hit by a rocket from Gaza.

There was no immediate Palestinian confirmation.

Two rockets were launched at Tel Aviv on March 14 but caused no casualties or damage, Israel said. It blamed the rocket launches on Hamas, though a security official who declined to be identified by name or nationality later said that the salvo, which missed any built-up areas, had been set off by accident.

There was no immediate comment from Netanyahu on Monday’s incident.

His chief rival in next month’s election, centrist ex-general Benny Gantz, issued a statement accusing the rightist premier of having “bankrupted national security”.

Israel’s military accused Hamas of carrying out a rocket strike from the Gaza Strip and Israeli media said troop reinforcements were being sent to the border of the Palestinian enclave.

The allegation against Hamas was made in a tweet by Lieutenant-Colonel Avichai Adraee, an Israeli military spokesman. Two TV stations separately said that two new infantry brigades and armoured units had been mobilised for Gaza.

By In Cyprus
Previous articleBrexit up in the air as May pushes divorce deal for third time
Next articleUPDATE-Missing boy was found, says police