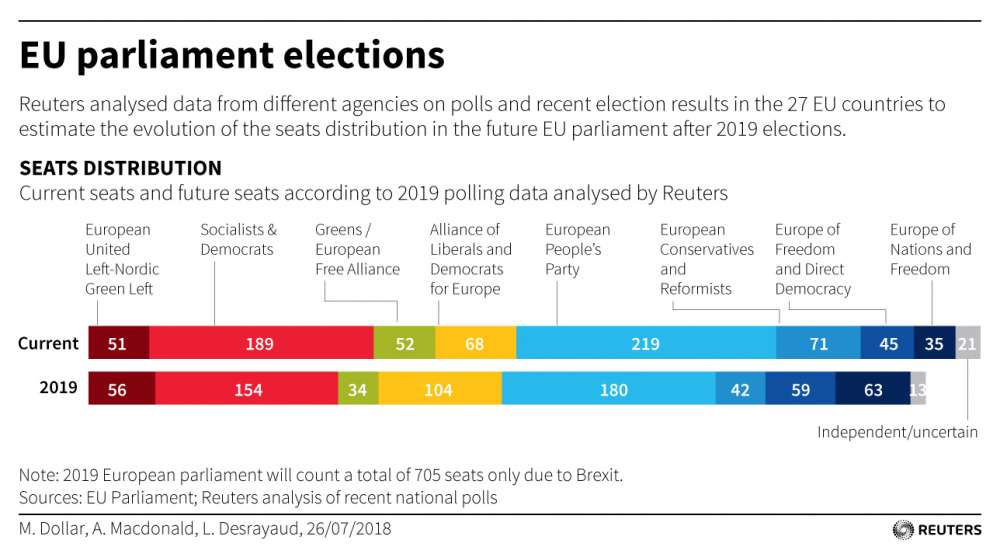 Eurosceptic parties could expand their strength in the European Parliament by over 60 percent at elections next May, adding pressure on EU leaders pressing for deeper integration after Brexit, a survey by Reuters of national opinion polls suggests.

The snapshot of polls, conducted by a variety of bodies in the 27 states that will remain members of the European Union after Britain quits next year, is rough and ready. New party alignments in the next EU legislature will depend heavily on horse-trading after next year’s elections. But the data indicate a clear strengthening for movements outside the old mainstream.

The Reuters analysis, which is based on the existing eight transnational party groupings in the Parliament, comes as Steve Bannon, an architect of President Donald Trump’s election win in the United States, has launched a project to coordinate and bolster the anti-EU vote across the Union.

Capturing more than 15 to 20 percent of the chamber for parties firmly hostile to the EU looks from the survey evidence to be an uphill struggle for the former White House strategist.

The current popularity of the anti-establishment parties in Italy’s new coalition, 5-Star and The League, boosts the score of their current blocs in Brussels, though they may not stay at that level after a year in government in Rome. Their ratings, and the rise of Alternative for Germany, more than offset the loss to the anti-EU camp of the UK Independence Party, whose 19 members will leave when Britain quits the EU in March.

The EFDD, dominated today by UKIP and 5-Star, could grow to 59 from 45 seats. The ENF, including Marine Le Pen’s French National Rally and Geert Wilders’ Dutch Freedom Party, could nearly double to 63 seats from 35, thanks in part to the surge in popularity of The League in Italy.

That would raise the two blocs’ combined total to 122 seats from 80 and their share to 17.3 percent from 10.6 percent as the total number of seats falls to 705 from 751 with Britain’s withdrawal. Such a combined force could increase their clout in legislative work.

It is by no means certain, however, that these alliances would remain the same next year. Five-Star has already explored the possibility of joining the pro-EU centrists in Brussels. Other parties could shift to more overtly eurosceptic positions.

They might include members of the ECR, set up by Britain’s ruling Conservatives as a eurosceptic alternative to the main centre-right EPP and which will now lose British seats.

Poland’s ruling Law and Justice Party could be a candidate. However, like Hungarian Prime Minister Viktor Orban’s Fidesz, currently a controversial member of the EPP, they do not share Le Pen and Bannon’s goal of breaking up the EU altogether — not least because Brussels gives them substantial subsidies.

Elsewhere on the political spectrum, the collapse in elections last year of the traditional left and right in France is also reflected in both a potential boost for the European Parliament’s centrist bloc ALDE — if President Emmanuel Macron’s new movement aligns with it somehow — and for the somewhat loose alliance on the far left known as GUE.

National polls, which European Parliament officials regard as a fair indicator of likely voting in the EU election, show Macron’s party winning 19 seats, compared with seven for French centrists at the moment. The new France Unbowed movement of Jean-Luc Melenchon would bolster the left of the EU spectrum, adding eight seats to its current one in Brussels and Strasbourg.

The polling analysis suggests the EPP, including German Chancellor Angela Merkel’s Christian Democrats, would remain the biggest group. But it would shrink to 180 seats from 219 in the smaller chamber, narrowing its lead over the centre-left S&D to 26 from 30. Centrists, helped too by the rise of Ciudadanos in Spain, should replace the ECR as third party.

Critics of the EU have accuse those mainstream parties of forming a defensive grand coalition supporting the executive European Commission in expanding EU powers.