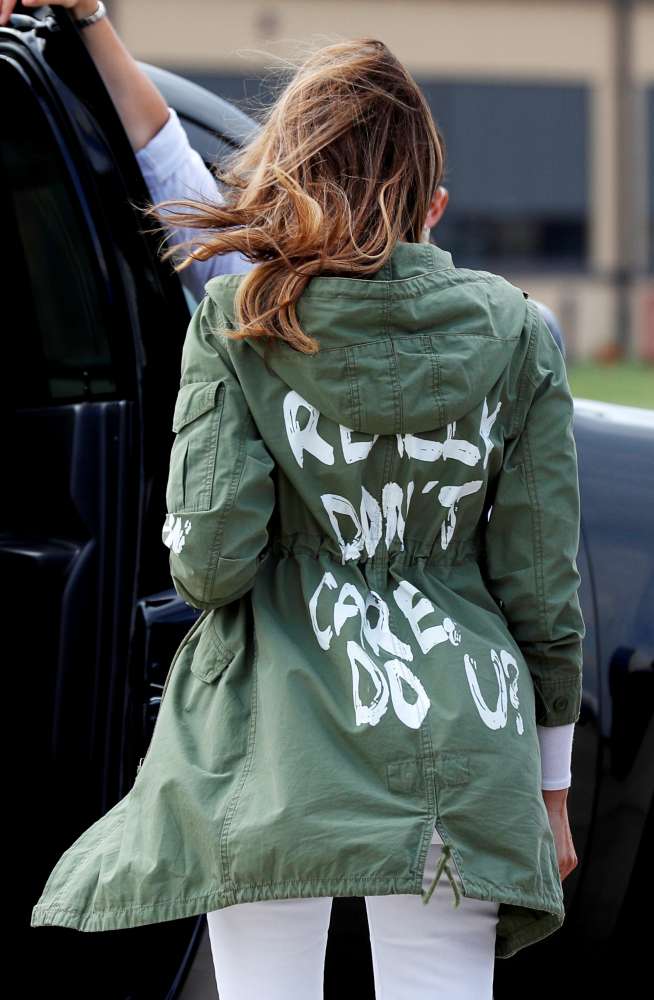 First Lady Melania Trump‘s visit on Thursday to a Texas shelter housing migrant children separated from their parents was overshadowed by a jacket she wore with the words: “I really don’t care, do u?” scrawled in white brush strokes on the back.

Melania Trump was shown in photos wearing the hooded green khaki jacket designed by fashion chain Zara as she boarded a flight from Andrews Air Force Base to the border facility in McAllen, Texas. She had it on again when she left the aircraft upon returning to Washington D.C. later in the evening.

“It’s a jacket,” Stephanie Grisham, Melania Trump‘s spokeswoman, told reporters. “There was no hidden message. After today’s important visit to Texas, I hope the media isn’t going to choose to focus on her wardrobe.”

Defending his wife’s choice of jacket, Trump blamed the media, tweeting: “I REALLY DON’T CARE, DO U?” written on the back of Melania’s jacket, refers to the Fake News Media. Melania has learned how dishonest they are, and she truly no longer cares!”

The trip to Texas was the most high-profile public appearance Melania Trump had made since undergoing a surgical procedure for a kidney condition on May 14.

The first lady, a former fashion model, sometimes gets input on wardrobe decisions from her fashion adviser, Herve Pierre. The backlash came fast and furious on Twitter, threatening to undercut the compassionate visit to the shelter.

Her unannounced visit to Texas came a day after her husband President Donald Trump signed an executive order to modify his administration’s practice of separating children from their migrant parents when they illegally enter the United States.

The president ordered federal agencies on Thursday to begin reuniting immigrant families at the U.S.-Mexico border, but his efforts to roll back a policy that drew global condemnation were beset by confusion.

Melania Trump met with staff in McAllen where over 50 children aged 12 to 17 were housed. Six of them were separated from their parents upon crossing the border, authorities told reporters.

By then the jacket was nowhere in sight.

Melania Trump sat alongside Health and Human Services Secretary Alex Azar at a table at Upbring New Hope Children’s Center and heard caregivers explain how the children are well treated.

She visited a schoolroom and chatted with about 20 young girls and boys. In one classroom, children were being taught about the July Fourth Independence Day holiday. On the wall was a hand-painted American flag and the children signed it. The first lady signed it as well.

On Wednesday, when signing the executive order to reverse the policy on separating children from parents, Donald Trump cited his daughter and his wife as influencing his decision.

Melania‘s trip to Texas was cut short by heavy rain and flash flooding. She put the jacket back on as she disembarked from her plane back at Andrews Air Force Base near Washington

By In Cyprus
Previous article
The attackers, under attack
Next article
Update: Police arrest man claiming to have a bomb at London rail station