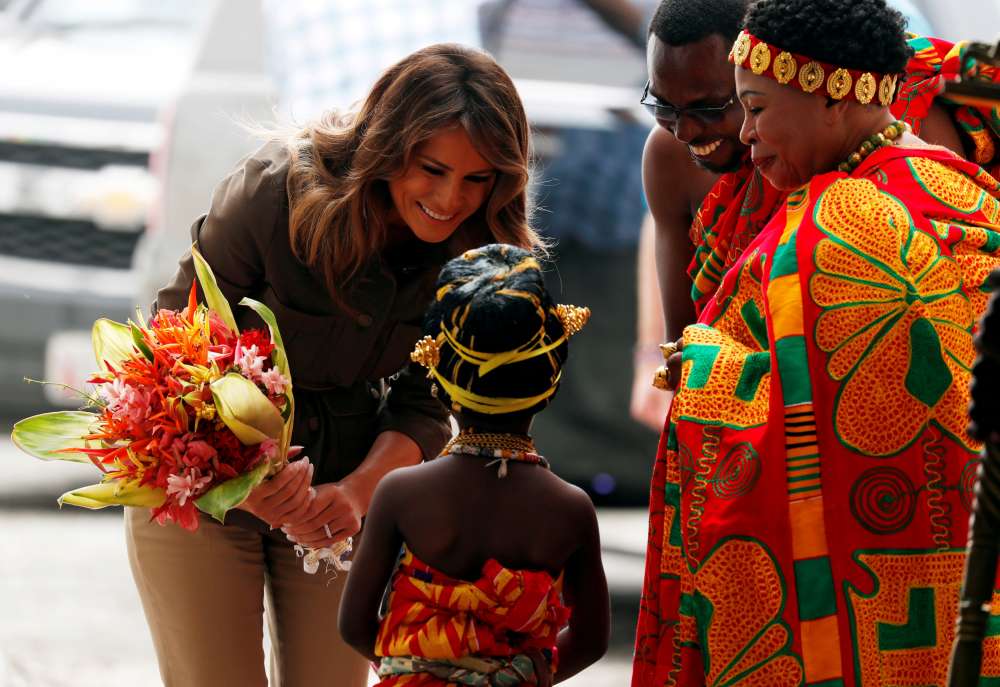 U.S. First lady Melania Trump on Wednesday laid a wreath at a slave fortress on the coast of Ghana, vowing never to forget the place where Africans were held before being shipped away into further hardship, most across the Atlantic.

“It’s very emotional… I will never forget (the) incredible experience and the stories that I heard,” she said after seeing the dungeons and walking through the ‘door of no return’, the castle’s final exit towards the ocean.

She arrived in Ghana on the first stop of her first solo international trip as first lady, a tour of Africa, a continent her husband has been reported to have referred to derisively. She will also visit Malawi, Kenya and Egypt.

President Donald Trump has not visited Africa since taking office in 2017. In January U.S. media reported widely that he described African states as “shithole countries” during a discussion with lawmakers about immigration. He has denied making the remark.

The 17th century Cape Coast castle, now a monument, has attracted world dignitaries including America’s first black President Barack Obama and his family, who also shared their emotions at the site.

During her tour on Wednesday, Melania Trump walked slowly with a guide through various wings, asking questions. She passed a row of cannons and descended into a dungeon where male slaves were held in chains.

“It’s really, really touching,” she said. “The dungeons that I saw, it’s really something that people should see and experience, and what happened so many years ago — it’s really a tragedy.”

Before proceeding to the slave castle, she visited the palace of the head chief of the area and obtained royal approval to visit the fortress after presenting drinks to the chiefs.

The ceremony took place in Obama hall at the Emintsimadze Palace, a hall that was renamed in Obama’s honour after his visit to the area in 2009.