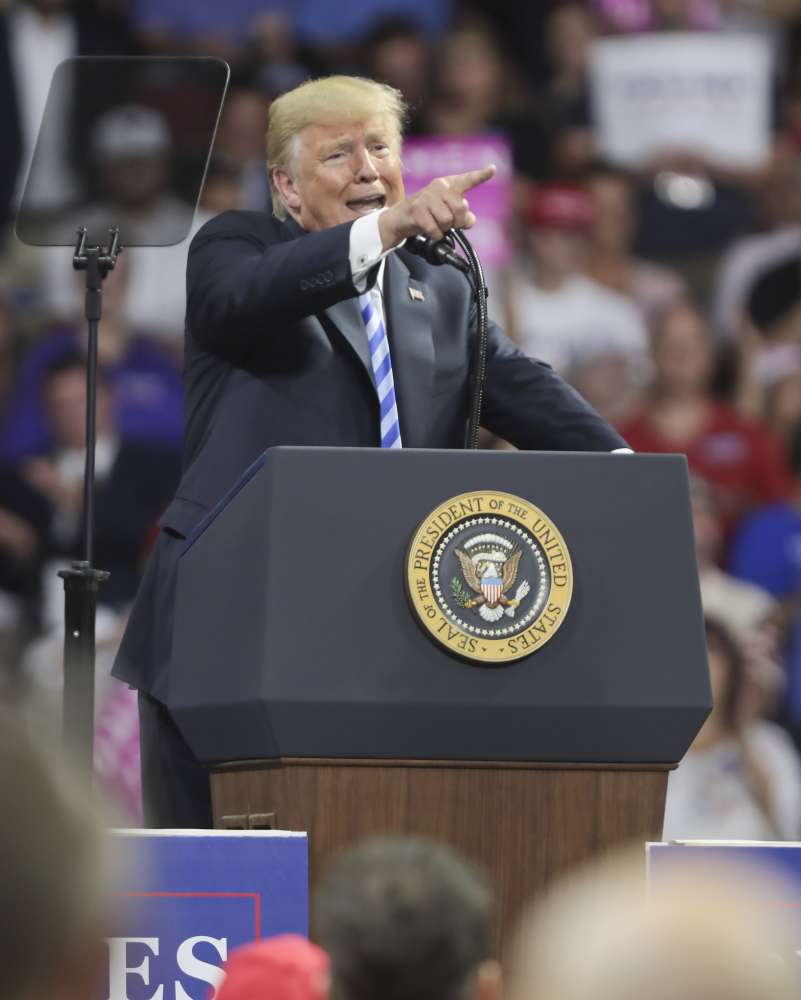 President Donald Trump suffered twin setbacks on Tuesday with two ex-advisers facing prison sentences – and one of them sayingTrump told him to commit a crime – possibly hurting his Republican Party’s election prospects and widening a criminal probe that has overshadowed his presidency.

Within minutes of each other in separate courts, former Trump campaign manager Paul Manafortwas found guilty on tax and bank fraud charges, while Trump‘s former personal lawyer Michael Cohen pleaded guilty to a range of charges.

Cohen also testified that Trump directed him to commit a crime by arranging payments ahead of the 2016 presidential election to silence two women who said they had affairs with Trump.

The president has denied having affairs with the women. His lawyer Rudy Giuliani has said the payments were made to spare Trump and his family embarrassment and were unrelated to the campaign.

The setbacks on Tuesday refocused attention on Special Counsel Robert Mueller’s inquiry into Russian meddling in the 2016 presidential election, whether Trump‘s campaign colluded with Moscow and whether Trump obstructed justice by firing then-FBI Director James Comey, who was formerly in charge of the investigation.

Moscow has said it did not interfere in the 2016 election and Trump has denied collusion, calling Mueller’s probe a “witch hunt.”

Of the two latest developments, Cohen’s plea deal was the more troublesome, said those aroundTrump.

“We’ve dubbed him Michael ‘the Rat’ Cohen,” said one source close to the president, who asked not to be identified.

“A bad day for the home team,” the source said, adding that the legal woes could depress voter turnout and increase Republicans’ risk of losing their 23-seat majority in the House of Representatives in November’s congressional elections. “This hurts our midterm prospects.”

A Democratic victory in November would limit Trump‘s ability to push through legislation and increase the risk of calls for his impeachment.

Cohen’s lawyer, Lanny Davis, said late on Tuesday that his client was “more than happy” to tell Mueller’s legal team everything he knows about Trump.

Democrats pounced on the Cohen and Manafort cases, saying they bolstered their argument that the Trump White House was weighed down by scandal.

“The American people deserve answers regarding the president’s role in these corrupt and criminal actions,” said Democratic Representative Rosa DeLauro.

Rodell Mollineau, a senior Democratic strategist, said the news “adds to a constant drumbeat that will ultimately affect some independent voters” and help Democrats at the polls.

“Manafort being convicted, on its own, might not sway any votes. But given the totality of criminality uncovered … it will be hard for some Republicans to ignore and even harder to explain.”

Still, there were no immediate calls for Trump‘s impeachment and Republican lawmakers did not join the chorus of criticism from Democratic ranks.

The long-term impact of the Cohen and Manafort cases will likely depend on how they affect the turnout of Republican and Democratic voters in November.

While he undoubtedly had a bad day on Tuesday, some analysts said Trump might be able to turn the setbacks to his advantage by reinforcing core supporters’ views that he is under siege, said Andy Smith, director of the University of New Hampshire Survey Center.

“In midterm elections, the president’s party tends to be less interested and less motivated to vote. But one thing that will motivate people to get out and vote is if they believe the party is being attacked unfairly,” he said.

At a rally in Charleston, West Virginia, on Tuesday night, a relatively subdued Trump did not mention either the Cohen or Manafort case.

Instead, as supporters cheered him on, he made fun of his opponents’ focus on the Mueller investigation, saying they were desperate to find collusion with Russians.

“Where is the collusion? Where is it?” he said, mimicking his critics.

Josh McGrew, who traveled from Huntington, West Virginia, for the rally, called the investigation a “smear campaign” and said his support for Trump was unshaken.

“This is all about finding out anything they can in somebody’s past,” McGrew said. “They haven’t come up with anything in a year and a half, almost two years.”

The Cohen and Manafort cases were unlikely to erode Trump‘s support from his political base or the Republican Party establishment, said Larry Sabato, a political analyst and director of the University of Virginia Center for Politics.

“I don’t think there is any change at all,” said Sabato. “That’s the amazing part of it. The Trumpbase and virtually the entire Republican Party could care less. The polls will bear me out.”

By In Cyprus
Previous articleUS-Turkey crisis could end “instantly” if pastor freed – Bolton
Next articleArmy officer arrested for possession of revolver, explosives